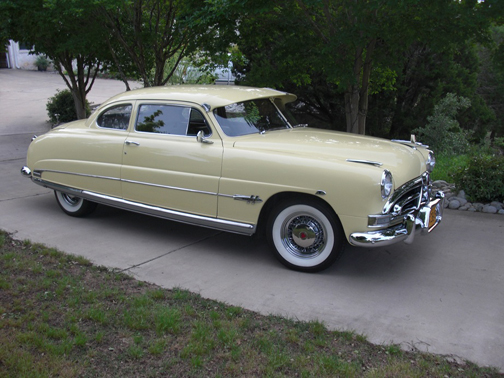 I’ve had a real Jones for a Hudson Hornet for quite some time.  Truth be told, until “Doc” came into our stewardship, I had never once actually seen any sort of Hudson in the flesh (well, save for my old uncle E.L.’s Hudson Terraplane pickup years ago).

But, several years ago I became fascinated with the beautiful lines of the Hornet.  A shape instantly recognizable, even to guys like me who’d never seen one in person.  The sweeping lines of chrome, the swoopy rear end, have all drawn me to this model like a moth to a flame.

Thus encouraged, I’ve had a regular search going on eBay motors to find MY Hornet.  For well over 3 years, the object of my attention has remained elusive.  Sure, on any given day, there are several Hudsons, and the occasional Hornet, listed on eBay, but invariably, on closer inspection, the car would be a tarted-up barn-queen, or rust haven, or would have been “improved” by some idiot who thought that slapping the ubiquitous Chevy V8 under the hood and painting it lime green would be an attraction to others.

Then, one day in May, 2010, MY Hornet magically appeared for sale on eBay.  The car was a 2-door coupe, the lines of which I preferred over the 4 door sedan, and had been restored by noted Hudson authority Bill Allbright (recently and sadly deceased).  This car had the features I was looking for:  a nice period-correct pastel yellow-creme color, Kelsey-Hayes Wire Wheels (a popular period option), the exterior sun visor, and last but not least, the required under-dash chrome kleenex dispenser!

One is never sure about the validity of a seller’s representations (restored by Bill Albright?) but sure enough, shortly after acquiring the car, I had occasion to remove the driver-side door to repair a vent window mechanism, and there, proudly displayed, was the restoring artist’s signature along with restoration date of 1-01-2001: 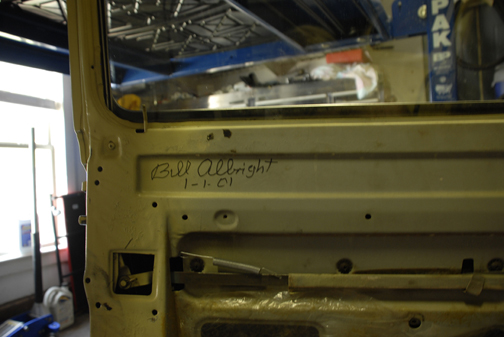 Since all classic cars naturally have to have a personal name, the only logical one for our Hornet was “Doc”, after the character in the animated movie “CARS”, which, yes, featured a Hudson Hornet as one of the principal characters.

Why the fascination with Hornets?  Well, for one thing, I was drawn to the iconic “Twin-H” engine.  A beautiful-yet-simple flathead 6 cylinder of huge displacement (at 308 cubic inches, larger than any other production car in 1951).  The Twin-H was so named due to its twin carburetor configuration, and immediately identifiable under the hood by a pair of huge, fire-engine red air cleaners. 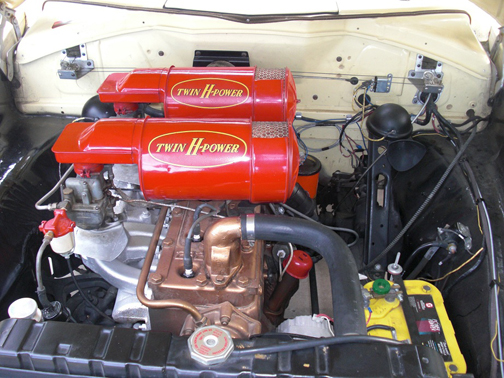 This engine, while thirsty (10-12 mpg), developed a strong 160 horsepower, while competitors such as Ford’s V8 could only muster slightly over 100 horsepower.  The engine itself is a real showpiece, coming colorfully from the factory with the metallic copper-hue block as restored on my car.

My second fascination with the Hornet was with its innovative “stepdown” chassis design.  Essentially, Hudson was the first company to depart from the traditional body-on-top-of-frame construction, in favor of a semi-unibody design that allowed the passenger footwells to extend below the partial frame that ran outboard of the footwells along each side.

This configuration allowed passengers to sit much lower in the car, and created a significantly lower center of gravity than other cars of the period.  As huge as this car appears, both in photos and in the flesh, the top of the roofline is an astonishing 5 inches lower than any other contemporary sedan.

This design was so innovative, that, combined with the powerful engine, it contributed to three national NASCAR championships won in 1951-1952 and 1953 by a well known racer named Marshall Teague.  Herb Thomas was another well known Hudson racer, back in the times when “stock car” meant just that:  “race on Sunday, sell on Monday“. 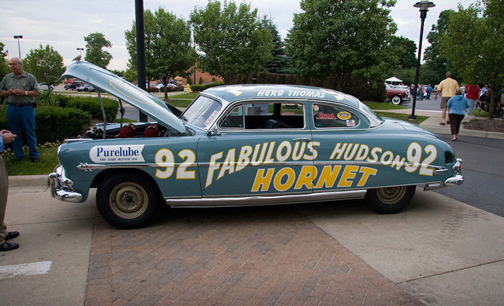 Additionally, I was drawn to the elegant interior of the Hornet.  Stainless steel trim, lavish chrome gauge cluster set against a backdrop of wood-grain metal and padded dash, set a fitting stage for the beautifully translucent ruby red steering wheel adorned with the large Hudson horn button. 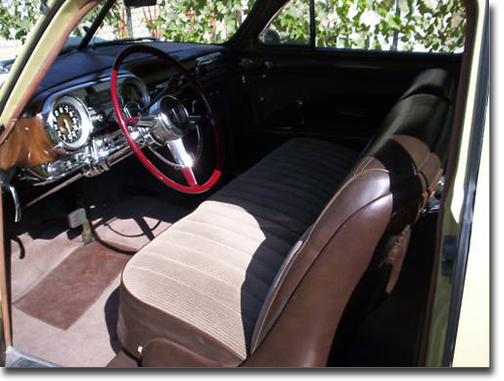 From all angles, the car just looks “right”.  The over-the-top chrome bumper treatment seems just right for this body shape: 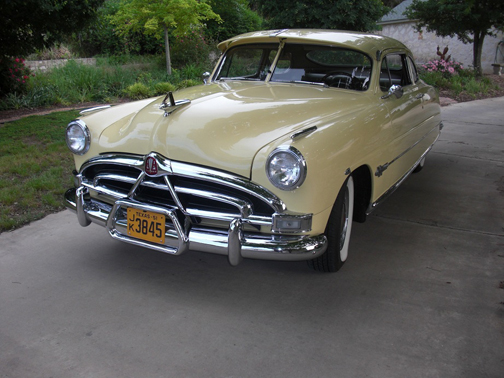 Yet the rear-view of the car has nothing to apologize for either.  The huge rear glass provides ample aft visibility for the driver, and the trunk could easily swallow a dozen golf bags. 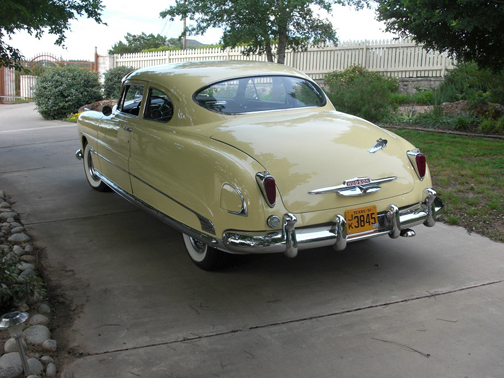 But let’s set aside the artistic aspects of this car and examine what it is like to drive!

Sitting behind the steering wheel, and aiming out over seeming acres of front hood, one gets the sensation of managing the Queen Mary!

Turn the key, then press the chrome starter button (and BMW thought they had an innovative idea with the separate START button).  Flick the accelerator pedal a single time to “prime” the carbs, and the big 6-cylinder engine easily comes to life, quickly settling down to a quiet idle of 500-600 RPMs.  It takes just a couple of minutes for the engine to warm up to operating temperature, and then the car is ready to move.

Slip the transmission into D(rive), (there is no PARK position… the Reverse position serves as the locked park position when the engine is at rest), give a little pressure to the steam-iron-shaped accelerator pedal, and the car moves smartly on its way.

Steering effort for the non-powered steering mechanism is “masculine” at best.  One-handed steering at slow speeds won’t really get the job done.  However, once the beast is under way, the steering feels responsive, and physical effort diminishes.

Everything about the car underway shouts STABILITY.  It just feels like an invulnerable tank when in motion, and there is a strange sensation of calm and security from behind the wheel.  The engine is extremely quiet.. so much so that when coming to a stop at a traffic light, frequently it gives the false sensation that the engine has quit running.  Likewise, road noise is amazingly subdued by the heavily insulated body, as is wind noise with the windows up or down.

Without air conditioning, in summer months the front vent windows, actuated by their own individual winder knobs, are a welcome addition.  Surprisingly, cranking the window a full deflection doesn’t create any appreciably extra wind noise, but does add significantly to the physical comfort of the occupants.

The car feels very stable on the road, and handles curves well, albeit with a very noticeable amount of understeer, even during mild course changes.  The proper process is to just begin cranking on the steering wheel until some result is observed, then hang on until the turn is complete!

The automatic transmission provided by Hudson was once of the very first to have 4 full forward gearing speeds.  Unfortunately, lacking the electronic controls of more modern day cars, the Hornet has to rely on primitive throttle shaft positioning and internal governors to control shifting from one gear to the next.  Transitioning from 2nd to 3rd gear in this car can only be gratuitously described as brisk.  A more apt description would be the feeling that you’ve just been slammed in the rear by a following car.

Nevertheless, the engine and transmission combination work well together, and propel the car quickly to highway cruising speeds.  A good 75 mph cruise is accomplished with little effort from the engine, which seems to be loafing at an estimated 3,000 RPMs or so.

This car is solid, rattle-free, quiet on the road, and powerful enough to keep up with the big boys on the freeway.  It’s a car I would hop in without reservation and take off cross country, confident that it would get me to my destination reliably, and in great comfort!

Summer finally got the best of me, so I bit the bullet and purchased air conditioning components from Vintage Air in San Antonio.  I wanted a period-looking underdash unit, and Vintage was the only supplier I could find who offers an all metal, chrome face under dash unit.. nothing plastic in this baby. 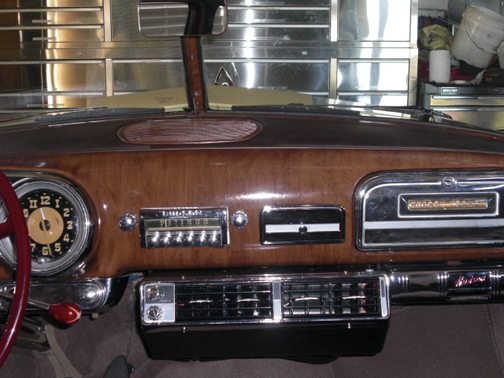 The biggest hurdle in this project (which consumed the better part of two weeks of my time), was fabricating a custom mounting bracket for the compressor.  I guess Hudsons just aren’t popular enough for any supplier to have a bracket on the shelf.  Using tips from several other Hudson owners, I came up with a nice bracket which looks good, and fits perfectly: 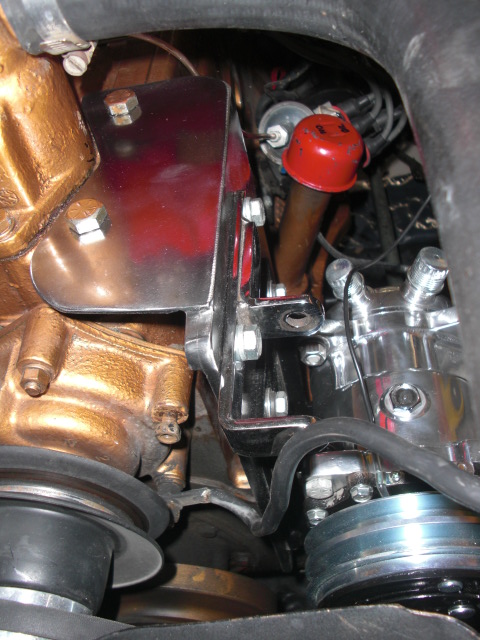 The end result is a car with whup-ass cold air!  That little unit has the most forceful air flow on high position of any A/C I’ve ever experienced.  So cold that I find myself generally choosing the lowest fan setting.

Okay summer, bring it on!