We have been anticipating our trip to Northern Germany for many months now.  We were invited by our good friends of 15 years Dietmar Panten and Britta Behmer to join us at their new vacation home on Schlei Fjord near the extreme northern border of Germany.  We have visited Dietmar and Britta many times at their primary residence in Munchen, but this was our first excursion to Northern Germany.

Finally the big day arrived in late May 2012 for our trip.

To put our trip into geographical perspective, here is a map showing our initial arrival airport in Hamburg, via Dusseldorf: 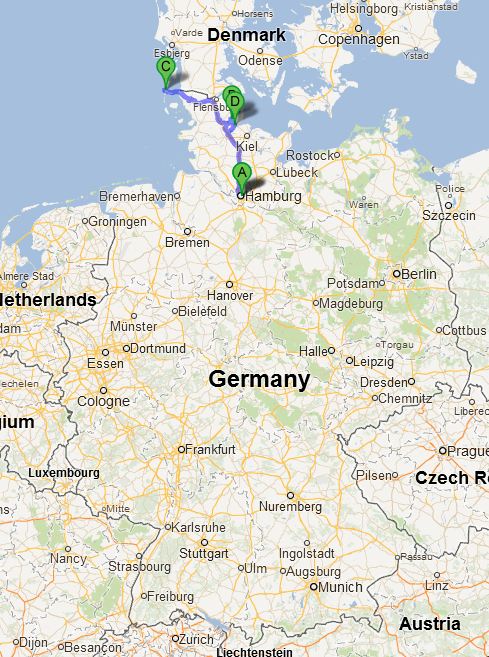 We could have never imagined (but should have guessed, given past experiences traveling with Dietmar and Britta) that our one week in Germany could be filled with so many adventures.  As I write this, just a few days after our return, my poor brain is already fuzzy trying to remember all the places and activities we experienced.

On our arrival day we went straight to Dietmar and Britta’s new house, which is located in a quaint little area called Huelsen.  Their house is RIGHT on the water of 30 mile long Schlei Fjord, which opens into the Baltic Sea about 10 miles to their east.  A beautiful marina is part of the little community where they live.  Dietmar has installed interactive video cameras both in front of his own waterfront home, and at the marina.  You can view photos from these two cameras (updated every 3 minutes) on the website at:   www.marina-huelsen.de  (Click on the WEBCAM menu, and keep in mind that Germany is 7 hours LATER than Central time)

Accompanying Dietmar and Britta for the week was their good friend Manus (and ours, having met several times before in Munchen) All three of them are excellent windsurfers, and all had their gear on hand for the afternoon weather which cooperated with strong and steady windsurfable winds.  I was envious watching them launch their rigs just steps from the front door!

We were blessed with absolutely perfect weather for our entire stay.  Blue, near-cloudless skies, and temperatures ranging from 60-75.  Due to the northern latitude, there is almost 18 hours of daylight each day, with the final streaks of light disappearing somewhat past 10:30 PM in the evenings.

On the following day, we were treated to a boat tour of the Schlei Fjord, which took us all the way to the narrow inlet into the Baltic Sea.  At the end, the boat stopped at the dock, and there Dietmar and Britta ran into a craftsman who had built the cabinets for their Fjord home.  He has been working on a huge renovation project of the original lightkeepers house on the point, and we were all treated to a personal tour of the house overlooking the ocean.

Next day we took a train ride to Sylt Island which lies off the western coast of Denmark.  The “island” is actually connected to the mainland via a very thin strip of land, but too narrow to accommodate a roadway.  There is only a railroad, which is the only way to enter the island (the train DOES have auto-ferry cars, so you can put your car on the train for the trip out).  We elected to take the passenger service, and rent a car upon arriving on Sylt.  This island is a very popular tourist destination for northern europeans, and boasts a 30 mile long unbroken strand of the most beautiful beach you have ever seen!

The next day was a trip to Eckernforde, the closest decent-sized city to Huelsen, where Dietmar had arranged a private charter on a fishing boat.  We were joined by Britta’s parents Gerta and Gunther… their command of English was equal to our knowledge of the German language, so our communication was limited to hand signals and smiles!  The boat captain took us out into the harbor where we participated in the task of bringing up several of his one hundred submerged nets.  Pickings were pretty slim, with each net only yielding some 8-10 fish, mostly flounder.  It was a great adventure, and on return we purchased enough of the fresh fish to have a great dinner back home.

The following day was Britta’s birthday, and it was back to Eckernforde for a birthday celebration dinner at a nice harbor-front restaurant, again accompanied by Gerta and Gunther.

Our final day was spent in Hamburg, where we were given a grand insider’s tour by Britta’s old schoolmate Susanne and her husband K.P.  We participated in a combination city sightseeing bus/walking tour to appreciate the vibrant and bustling city of Hamburg.

Next morning, we were back on our Lufthansa flight to the US of A, wondering how a week could have slipped by so quickly, but filled with many memories!

Here’s a map of our basic travels during the week: 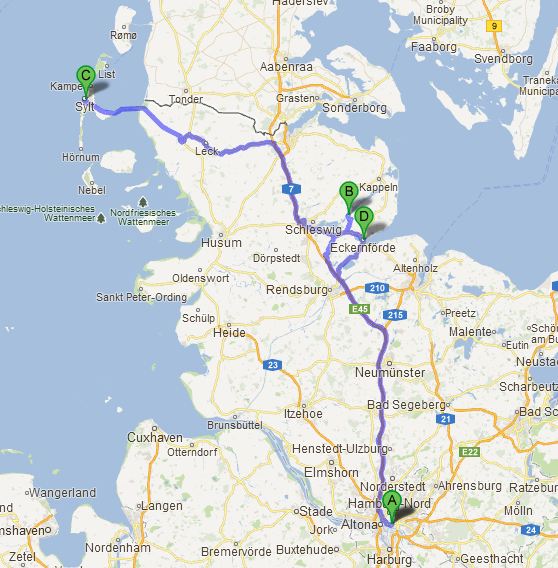 Last but not least, please visit our photo gallery to view lots of photos of our trip: