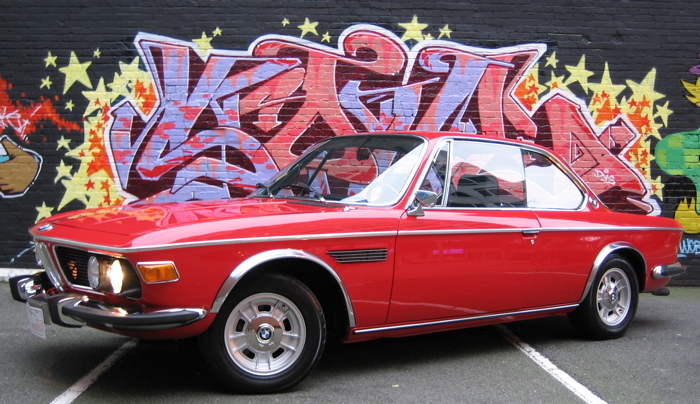 In April, I flew to Seattle to pick up our new garage toy, a beautifully restored 1972 BMW 3.0CS coupe.  2800 uneventful miles and 4 days later, the coupe was sitting in its new space in our garage.

Emboldened by the trouble-free drive from Seattle, through Southern California, and across Arizona, New Mexico, and Texas, Dorothee and I decided to press our luck and take on a similar-distance odyssey to join other like-minded vintage BMW enthusiasts at an automotive get-together in Winston-Salem, NC, called “Vintage at the Vineyards”.

In the weeks prior to our May 21 departure, I had been getting the coupe prepared:  engine, transmission and differential oil changes, tune the Weber carbs, replace a faulty blower motor, and set up our new Becker GPS navigation geewhiz gizmo.  Finally, on Tuesday afternoon late, just prior to our planned Wednesday morning departure, and after loading up all our stuff, I decided to take the car for a quick final shakedown drive around the neighborhood.  Just 2 blocks from the house, the engine coughed then quit!

Right off, I knew the problem, since I couldn’t hear the steady “tick-tick-ing” of the electric fuel pump.  I turned off the key, sat and waited about 5 minutes, turned back on the ignition, and, amazingly, the pump started working, and the engine cranked up!

It was too late to investigate further, so we both decided to let this ‘little’ problem just be part of the adventure.

Next morning at the crack of dawn, we fed the critters (Debra, our now-favorite petsitter, to take over for the next 7 days), and began our journey.  Although we had no particular route nor destination plans, other than to arrive in Winston-Salem on the afternoon of Friday, May 23, our ultimate route turned out to be a great circle encompassing most of the southeastern part of the US, to wit: 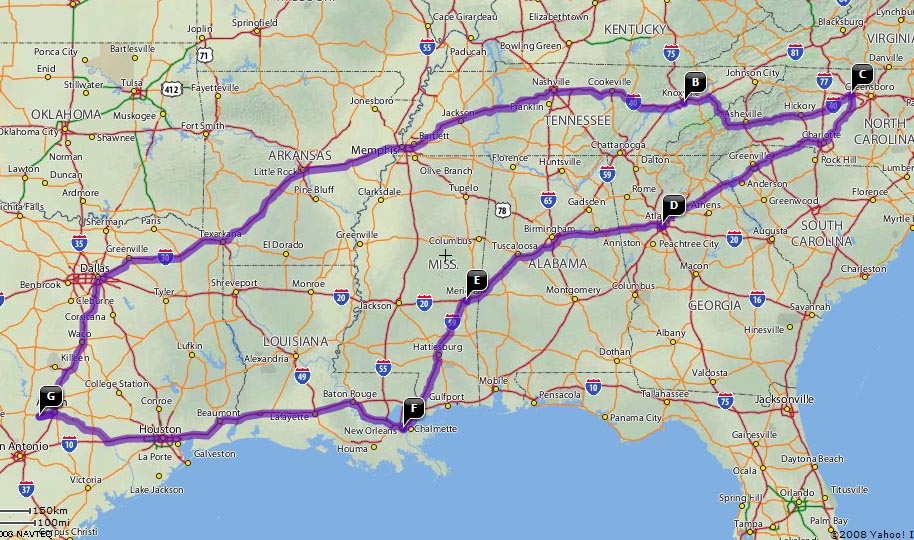 Our first day’s drive was to be the longest… some 750 miles to Jackson, TN, just shy of Knoxville.  Our scheme:  blast ahead to Jackson, staying overnight there,  leaving us but a short leisurely drive next day to Knoxville, where we’d explore the town.

Along the way, the little red coupe yielded a consistent, but not laudable, 17-18 mpg.  Of course, it insisted on a diet of only the premium spread at the pumps!  To make our un-airconditioned trip more pleasant, we threw in our little MP3 player (including the complete Spanish language course), and brought along our airline noise-reduction headsets!

In Jackson, after rejecting several steak-and-fry joints for dinner, we stumbled onto a little Mexican hole-in-the-wall joint.  It was here, surrounded by the comforting aroma of Pine-sol, we had one of the better real mexican meals we’ve had in ages, accompanied by the best kick-butt Top Shelf Margaritas (@ $3.50 each!).  Oh, don’t forget the incredible flan!

The countryside in Tennessee is just beautiful.  Trees everywhere, and a good interstate to get us where we were going:

Next morning we got off to a leisurely start, and after an uneventful drive, ended up in Knoxville for the afternoon.  Turned out, Thursday nights in Knoxville are for a huge street music fest, held two blocks from the nice Crown Plaza hotel we stayed at.  Lots of good food, people watching, and music:

From Knoxville, it was a 5-6 hour drive to our destination in Winston-Salem.  We got the opportunity to see first hand why they call them the “smoky” mountains:

Dorothee had arranged for us to stay at the Shafner House, a great old mansion B&B owned and run (almost without help) by a young couple who were refugees from the corporate world.  Best of all, the inn is located right on the edge of Old Salem town, affording us a nice walking tour of beautifully maintained and restored residences and stores from the 17th century.

That evening, we were invited, along with all the other bimmerheads, to a “weenie” roast at the home of a local BMW fan, Tim Creef, in the beautifully forested neighborhood near Wake Forest University, and met lots of new friends.

Next morning, it was up early to meet up with part of the group for breakfast in downtown Winston-Salem.

A bit rainy and cool to start, but by 10:00 or so the skies had cleared, and the day turned out to be a perfect car show day.

After breakfast, we were treated to a beautiful drive through sections of Winston-Salem, carefully laid out by fest-meister Scott Sturdy and his wife Patricia.  Although still a bit rainy, it was beautiful to see all those vintage BMWs lining the tree-studded streets.  The first attraction was a mini-scale replica of the Empire State Building, which was built by cigarette money in downtown Winston-Salem (hmmm wonder where the city got its name?)

Our route took us through the beautiful Reynolda Gardens (former estate of cigarette butt king R.J. Reyolds), and then wound along country roads to our car-fest destination of Westbend Winery.

Finally we reached our destination, and were directed to our parking spot, along with some 15 other E9’s (the BMW code name for our model).  There were some 200+ cars on display, all BMW’s older than 1985, mostly 2002’s, E9 coupes, 635 coupes, along with a few unusual convertibles, Isettas, and BMW motorcycles.  Unlike many car shows, this was strictly for fun… no judging or trophies for best, etc.  However, we did receive a first-prize trophy for being stupid enough to have driven almost 1400 miles to the event, making us the furthest distance entrants.

Here’s a few pictures we took of the event.

Later that evening many of the fest attendees reconvened at the downtown “Speakeasy” Grill, which was, again, an easy walking distance for us from our B&B.  Lots of good food and liquid refreshment, along with a nice little jazz group playing.  We were even treated to some hot harp playing by one of our own group, Jeff, a fellow E9 owner!

Next morning, Sunday, after a leisurely wake-up and breakfast, we were back on the road toward Austin.  Our first night’s destination to be Birmingham, AL.  I’m afraid we have nothing of interest to report here, other than the unbearably hot and muggy weather, and the stand-still traffic on the freeway as we neared the vicinity of Lowe’s Motor Speedway, where all the NASCAR-heads were converging to watch their favorite good ol’ boys drive around in a circle!

On the following day (Memorial Day) we’re off to an early start, with New Orleans as our destination. I have to say that the stretch of interstate I59 from Meridian Mississippi down to New Orleans has to be one of the most beautiful anywhere.  For long stretches, there are just forest-lined roadways, with medians so wide and tree-dense you can’t even see the opposing traffic lanes.  And the right-of-ways are kept perfectly mown and manicured, to create a park-like environment.  Best of all, there is little or no evidence of civilization, not even the ever-present billboards:

Remember the faulty fuel pump saga from our pre-departure night?  Well, Murphy finally reared his ugly head as we entered the French Quarter of New Orleans. Just one-half block from our destination hotel, the engine started sputtering, and I somehow just managed to get the car about halfway into the driveway and partially off the street before she gave up the ghost!  Thanks to a manual transmission and a robust starter, I was able to “lever” the car on into the parking garage just using starter alone!  Well, we had arrived, and it was New Orleans, so we checked in, and forgot about our mechanical problems in favor of touring the Quarter.

Later that evening, I managed to find a mobile car repair guy who answered his phone, and agreed to come by first thing in the morning with a new fuel pump and install it.  Sure enough, long about 9:00 AM the next morning, just after we had finished our obligatory trip to Cafe du Monde and our fix of beignets and coffee:

Our guys Preston Sr., and his son Joshua showed up to rescue the bimmer.  In short order, they had the new pump installed, and we were back on the road again by 10:30 or so:

I’m happy to report that our final leg of the trip, through Houston and on to Austin, occurred without further incident or comment.  Tuesday evening, around 8:00 or so, we rolled into our familiar homestead, a little travel weary, but with warm memories of good friends, good food, and a great travel tour through the southern states!

POSTSCRIPT:  About a week after our return from this great trip, I took “Gunther” out for a short drive.  Daammmn!  The NEW fuel pump quit again!  Well, after some investigation of the fuse block, it turned out some idiot previous owner had decided to rewire the power to the pump, but instead of using the fuse slot marked from the factory as “fuel pump”, he in his infinite wisdom decided to tie it into the cigarette lighter fuse.  I had previously checked the “fuel pump” fuse as a first-step troubleshoot, but this time, I went through all the fuses, and when I jiggled the actual fuel pump fuse, it fell apart in my hand!  Problem solved and now we have a spare fuel pump for the next breakdown!