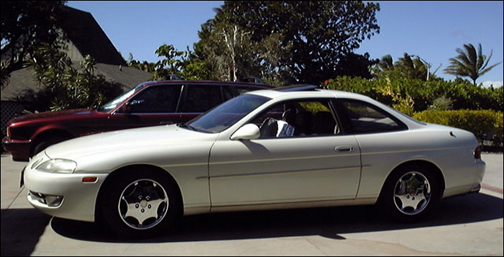 I loved that car.  The interior comfort appointments rival the best-built cars coming out of Europe today.  You were surrounded by REAL wood, sumptuous leather, and every imaginable electronic gadget one could ever desire.  Best of all, the A/C and radio controls were all “old-school” design with real, and simple rotary knobs to get the job done, instead of the $%&&@@# push-a-button 99 times style that current designers seem to think drivers want.

One nice and somewhat rare option on this car was a manual 5-speed transmission (most came with automatics).

Unfortunately, the car missed one very special quality… SOUL.  That’s right, I know you “a car exists solely to get me from point A to point B” drivers wouldn’t understand this, but as all car guys know, most vehicles have their own special personality and soul.  The Lexus, in all its oriental righteousness, sadly does not… no special quirks, no unusual handling characteristics, no outstanding handling nor performance.  The Lexus is just a fine compilation of steel and plastic designed to function without problem, without leaks, without maintenance, and without soul.

Unfortunately, being a car guy, I just couldn’t tolerate the bland, featureless “relentless pursuit of perfection” attributes of this car.  Most notably, the engine, albeit a nice, trouble free, quiet, dependable straight 6 cylinder engine, provided only adequate but not thrilling power.  Brisk acceleration was not a trait associated with this engine.

I began doing some research, and discovered that a similar engine, built by Toyota and installed in their 90’s vintage Supra automobiles, might be just the transplant to “fix” the Lexus’s lack of soul.  The Supra 6 cylinder engine has the same displacement as the Lexus, and a virtually identical lower-end block, making it a very easy physical swap with the stock Lexus.

The huge difference, however, lies in the upper part of the engine:  The Supra engine sports a unique, progressive twin turbocharger design which serves to boost the stock 230 horsepower of the Lexus up to a respectable 340 horsepower.  Even better, some minor modifications involving intake/exhaust plumbing and tweaking boost pressures can extract an easy 450 horsepower from this little 3 litre engine. Now we’re talking about some soul!

Thus began my novice journey into the world of enhanced engine performance.  I contacted a company from California that represented themselves as experts concerning the Supra/Lexus engine swap.  Additionally, I spoke with a local Hawaii independent mechanic shop about performing the swap.  Both of these companies insured me that this would project would be a piece of cake.  Armed with these “expert” assurances, I went ahead and sprung for a used Supra engine from California as well as the other components I was told would be needed for the project, and had everything shipped to the shop in Hawaii, where I delivered my Lexus for the transplant.

Well, it turns out that swapping these two engines is NOT such a piece of cake after all.  The major obstacle comes with the wiring interface;  each engine must have its own specific Electronic ECU module.  Each ECU has some 60 or so separate wiring connections, which then expand to a number of smaller plug-in connectors.  Unfortunately NONE of the connectors from the Supra engine, wiring harness, and ECU, are compatible in size or function with those used on the Lexus.  Herein lies the problem!

What ensued over the next months was a series of fruitless communications between me, the local shop owner, and the California company who supplied the engine and the components.  Each of the companies kept pointing fingers at the other, claiming incompetence and inexperience, and each abrogating any responsibility for the successful conclusion of my planned project.

Fast forward almost a year:  my beloved Lexus continued to sit forlornly in the outside parking lot at the mechanic’s shop, with no one offering a clue as to how to interface the wiring between the two engines, and all progress seemingly  halted.  It finally dawned on my that my car would become a permanent “lot queen” unless I took some drastic action.

One day, in an extreme heat of frustration, I called the shop owner and informed him I’d soon be picking up my car… called a tow company, and had the car towed back to my small 2 car suburbian garage.  I got on the phone, and ordered the complete factory manuals for both the Lexus and Supra models, as well as the extensive factory electrical wiring manuals for each.

Over the next month or so, each evening I sat at my kitchen table, poring over the complicated wiring schematics, trying to make sense of the differences between the two engines and their wiring requirements.  For the first week or so, these diagrams might as well have been hieroglyphics for all the knowledge they revealed.  However, I set up some cross-reference tables on my computer, and started making notes as I discovered similar functions.  Slowly but surely, the light began to dawn, and I started making sense out of these pages and pages of schematics.  Soon, I had completed a series of tables which showed the source and destination of every single wire associated with each engine’s wiring harness and ECU.

Finally, I felt I had acquired enough understanding of the wiring process to actually tackle the surgery necessary to mate the two systems together.  With the interior of the car literally stripped, I lay on my back in the passenger footwell (where the main engine ECU is located), and carefully disconnected one wire at a time from the old Lexus harness, and soldered/grafted it onto the new Supra harness.  By this time, I had the transplant engine prepared and ready for installation in the Lexus. 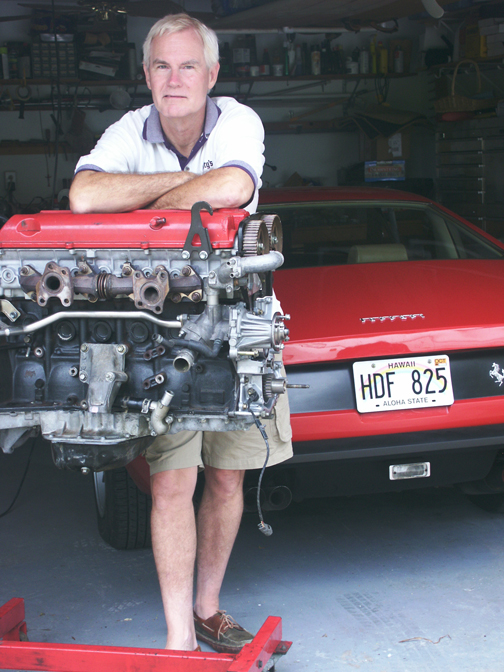 Thanks to my wonderful wife and always eager helper/assistant Dorothee, we somehow managed to get the engine into its new home without any outside assistance!

Some 6 weeks after bring my baby home from the bogus “expert” shop, I sat in the driver’s seat, turned the key, and miraculously, the new twin turbo engine came to life!  I had done it!

The next few weeks involved “cleaning up” all the remaining systems on the car.. getting the tachometer, speedometer, cruise control and A/C systems to function properly, interfacing the turbo exhaust system into the Lexus shell, upgrading the radiator, polishing the intake manifold and turbos to a mirror finish, and having other components powder-coated. The end result was a literal work of art in the engine compartment. 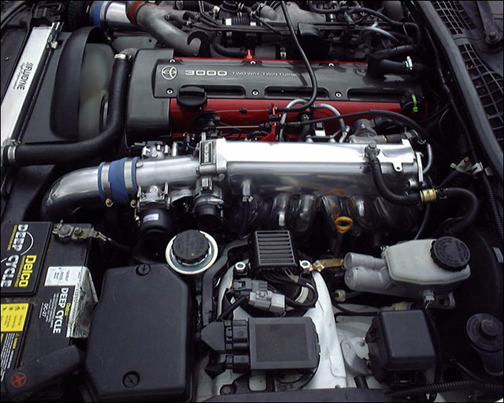 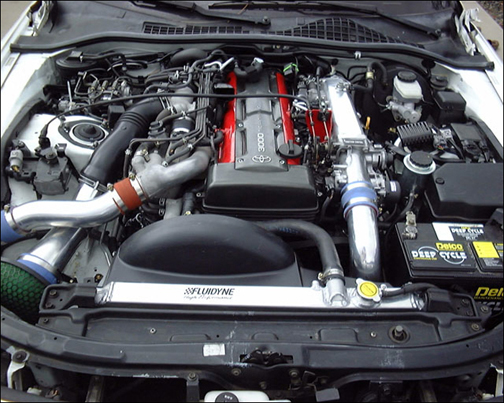 In the end, I wound up with a Lexus with soul!  Internally, ALL systems functioned exactly as with the original stock, but the turbocharged engine, modified from its stock configuration to operate at 18 PSI boost pressure, was developing some 450 gut-wrenching horsepower!  The ingenuous sequential design of the stock twin turbo configuration provided incredible power and torque at relatively low RPM’s (unusual for a turbo’d engine), which just kept building and building until, at about 3,000 RPM, the second turbo kicks in and all hell breaks loose! 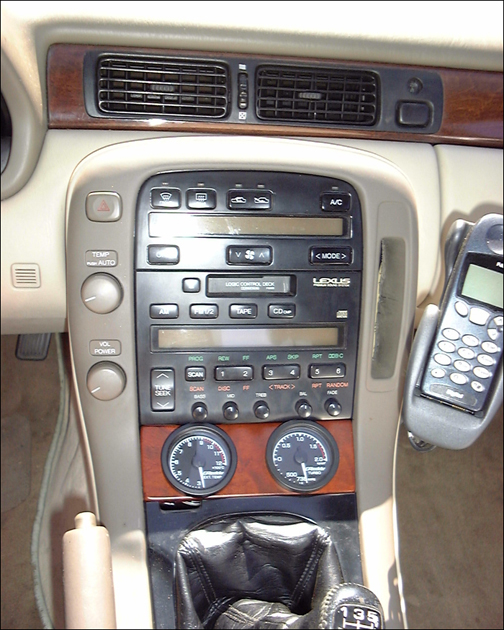 Later, on a quiet early Sunday morning after several months of ownership of my Ultimate Lexus , on a long straight stretch of road in a forever-to-be-undisclosed location, I reached a daredevil speed of some 165 mph, with the engine still pulling strong and asking for more until discretion and my faint heart dictated I close the throttle!

During my installation, assembly, and shakedown process I took many pictures and made exhaustive notes on the assembly, fabrication, and trouble-shooting techniques I had employed throughout my project.

With the project finished, I realized that my notes and images constituted a complete instruction manual to share with other Lexus owners who were seeking to add some soul to their car and create another version of the Ultimate Lexus.  To this day, this manual remains available for purchase on my website:  www.UltimateLexusTT.com, and I can take pleasure in knowing that my own experience and documentation has allowed countless others to create their own special Lexus! 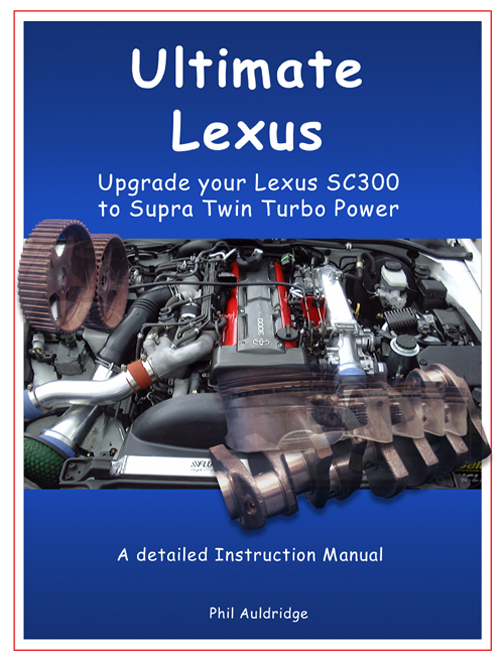