This will be the last blog segment as we prepare to depart Mexico.  It is with mixed feelings that we contemplate leaving Queretaro, as our time here has left an indelible memory of mostly pleasant surroundings, experiences and encounters.

The kindness, patience, and courtesy of Mexican citizens can’t be over-emphasized.  Every aspect of life here seems to resonate a quiet, self-sufficient spirit, with a happy, contented sense of well-being, regardless of material possessions or financial status.

We have been most impressed with the fastidious cleanliness of the streets and shops, the “after-you” courtesies that pedestrians (and vehicles) accord each other, the anticipated ‘buenos dias, or buenos tardes’ at every sidewalk encounter or shop visit, and the outpouring of the populace into the public squares every evening (most all the shops stay open until 9-10PM 7 days a week).

The price of everything here in Queretaro is, on average, about 1/3 the cost of similar expenditures in Austin.. food, accommodations, entertainment, etc.. the only exception being the cost of gasoline at the state-owned (and ONLY source) PEMEX stations, which weighs in around $4 US per gallon.

Earlier in the week, at Dean’s suggestion, I had picked up Amazon’s ebook version of the spellbinding and thoroughly engrossing non-fiction account of Austrian emperor Maximilian’s brief and tragic rein over Mexico in the mid-1800’s, “Maximilan and Carlota.. M.M. McAllen”.

I highly recommend this book, even for those non-history buffs in the audience. Interestingly, M.M. McAllen is a female author, raised on a “storied” South Texas ranch.

For those of you unbriefed in Mexican history, as was I, 31 year old Maximilan and his lovely 23 year old bride Carlota (daughter of Belgium King Leopold), were enticed by French emperor Napoleon, and led to believe the Mexican people had voted for them, into sailing from Europe to Veracruz and declaring his sovereignty over Mexico.  A huge rift between so-called president Benito Juarez’s struggling government (bolstered by the “conservative class, including the extremely powerful Catholic church), and “liberal” factions who wanted to see the government be free of religious oversight, (hmm.. I wonder if there is any correlation to current U.S. events?) set the stage to allow an outsider (Maximilian) to assume power.

As one might guess, things did not go well for Maximilian during his slightly more than 3 year “reign” over Mexico, with the end result being capture of his remaining forces in a protracted seige and battle at (guess where!) Queretaro, and the ultimate execution of Maximilian and his 2 top generals by firing squad.

By all accounts, Maximilan was a kind-hearted, benevolent person, but whose only prior claim to fame was his Hapsburg dynasty-accorded title of ArchDuke, and  failed governorship of a province of Northern Italy. (awarded by brother, Frans Josef, ruler of Austria).

Essentially, Maximilan was an inexperienced child of the court, sent to do a man’s job.  (again, see any correlations to the current Trump dynasty, populated almost entirely with relatives and other cronies having zero experience for their appointed position?)  As they say.. “history always repeats itself”

It is a tale so rich with intrigue and unexpected turns as to eclipse any attempted fictional story of similar plot.  So interesting to Dorothee and I was that much of the final turn of history took place right within walking distance of our Queretaro house.

Ironically, our house is situated at the crossroad of Calle Benito Juarez (named for the president who restored himself to power after defeating the “Imperialist” forces of Maximilan), and Calle Mariano Escobedo (named for Juarez’s right hand general, who presided over the defeat of Maximilian’s forces in Queretaro.)

In fact, I learned that the (somewhat mock) trial of Maximilian and his two generals, Miramon, and Mejia, was conducted in the Teatro de Republico just blocks away (one at which we witnessed a great jazz performance during our stay), and, that the beautiful hill next to the University, Cerro de las Campanas (hill of the bells), where Uriel had taken us on our first city tour with him, was the place where the 3 figures were executed by firing squad in 1867.

Several years after the execution, Juarez, having    been reinstated to his previous post of President, directed the construction of a lovely little shrine ( a little covered chapel) at the top of the hill, beautifully landscaped, 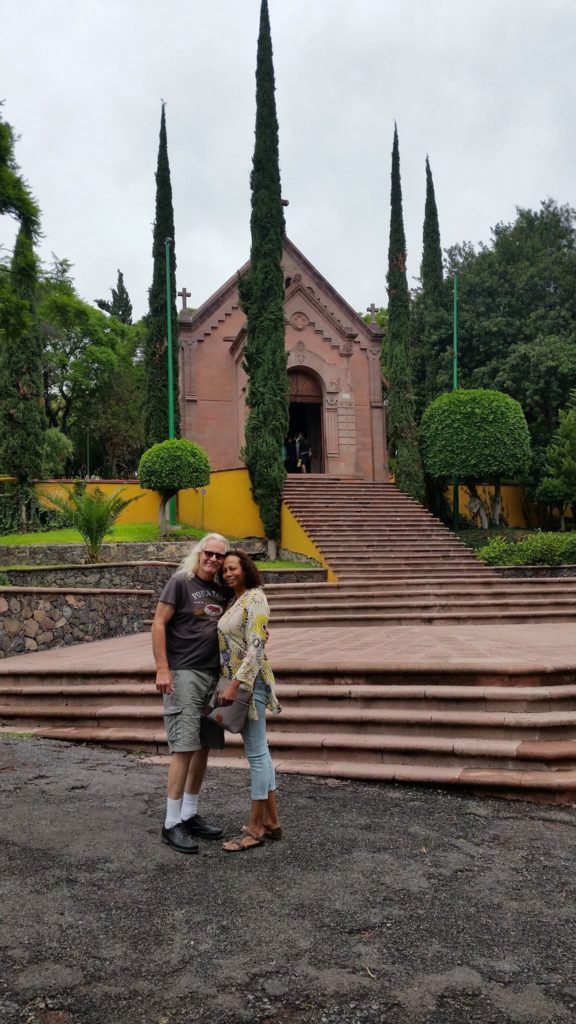 and, of course, further up the hill, a big circular plaza with a huge statue of Juarez, overlooking all of Queretaro below: 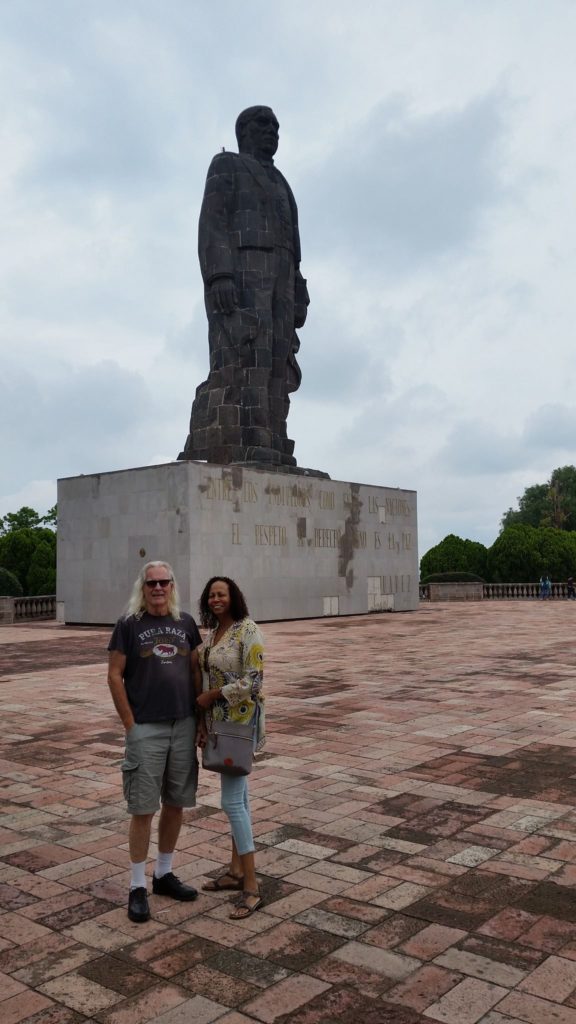 It is a gripping tale, and although a very long book, captured my interest from page one to the very end! Read it.. you won’t be disappointed. 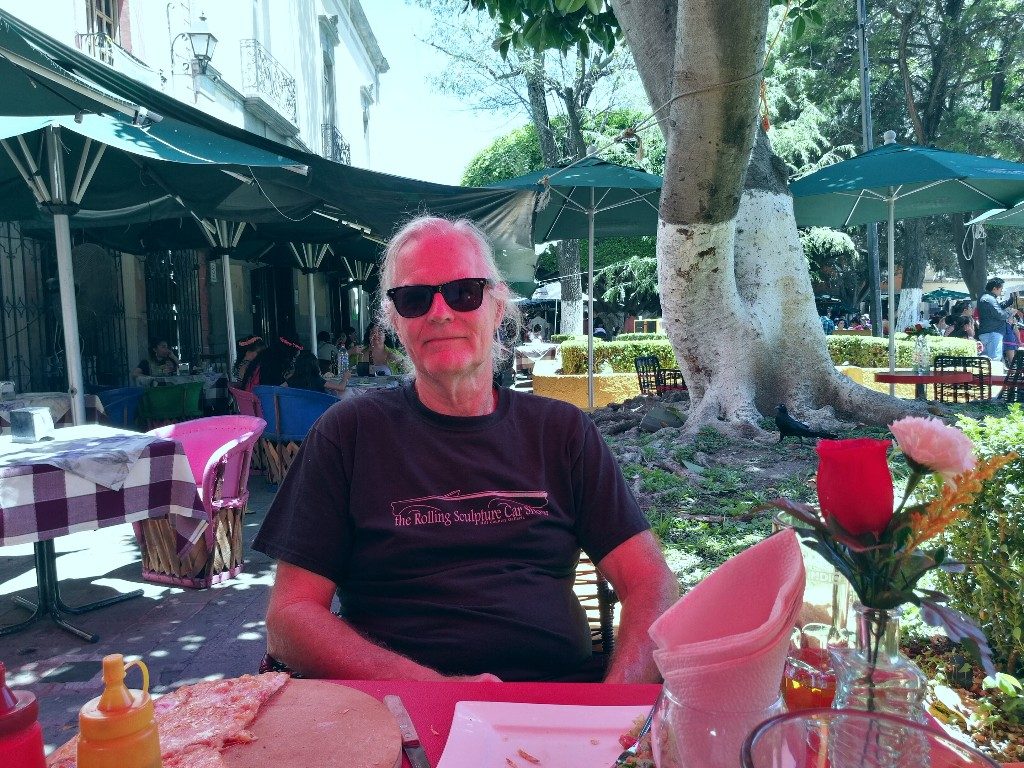 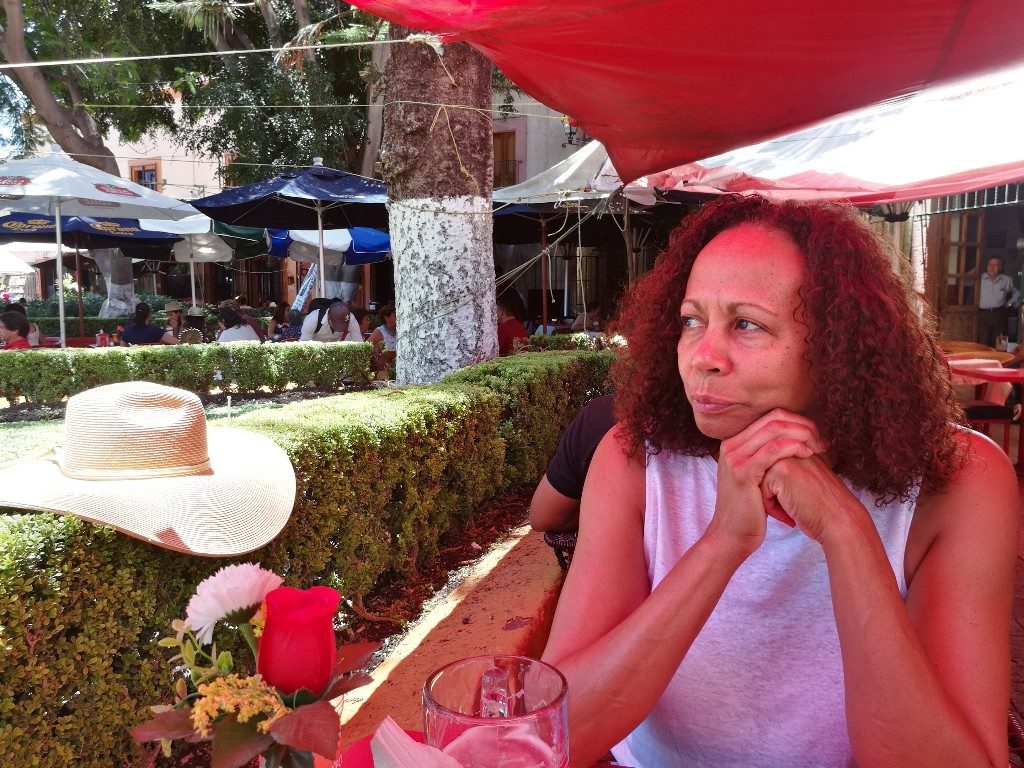 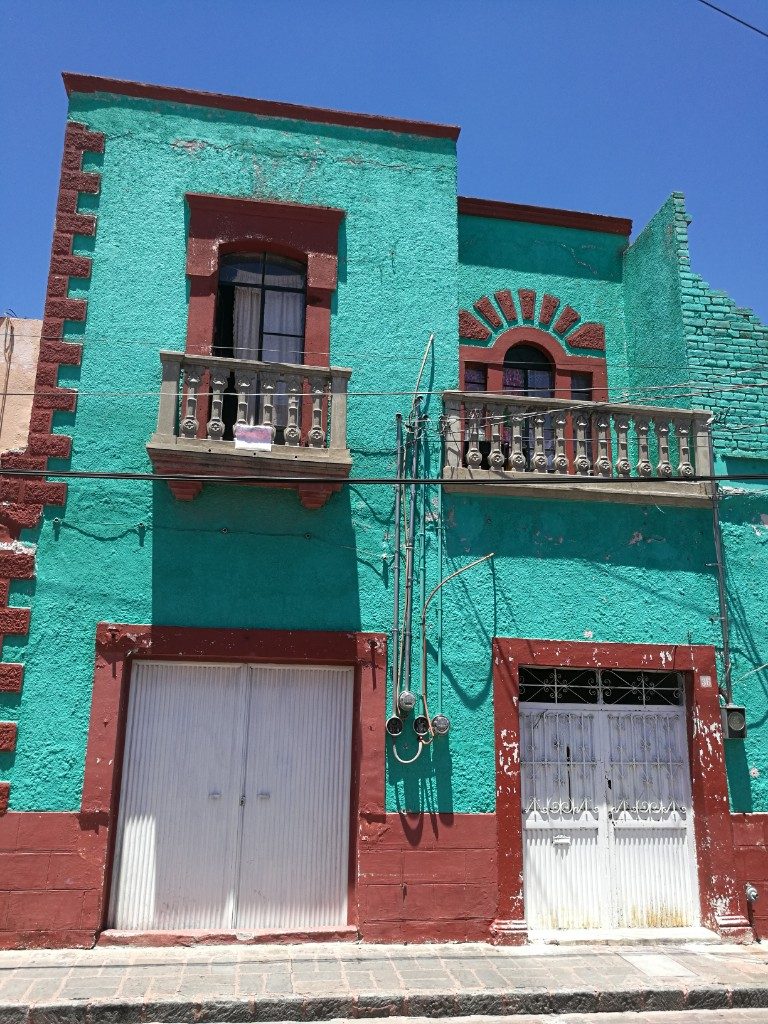 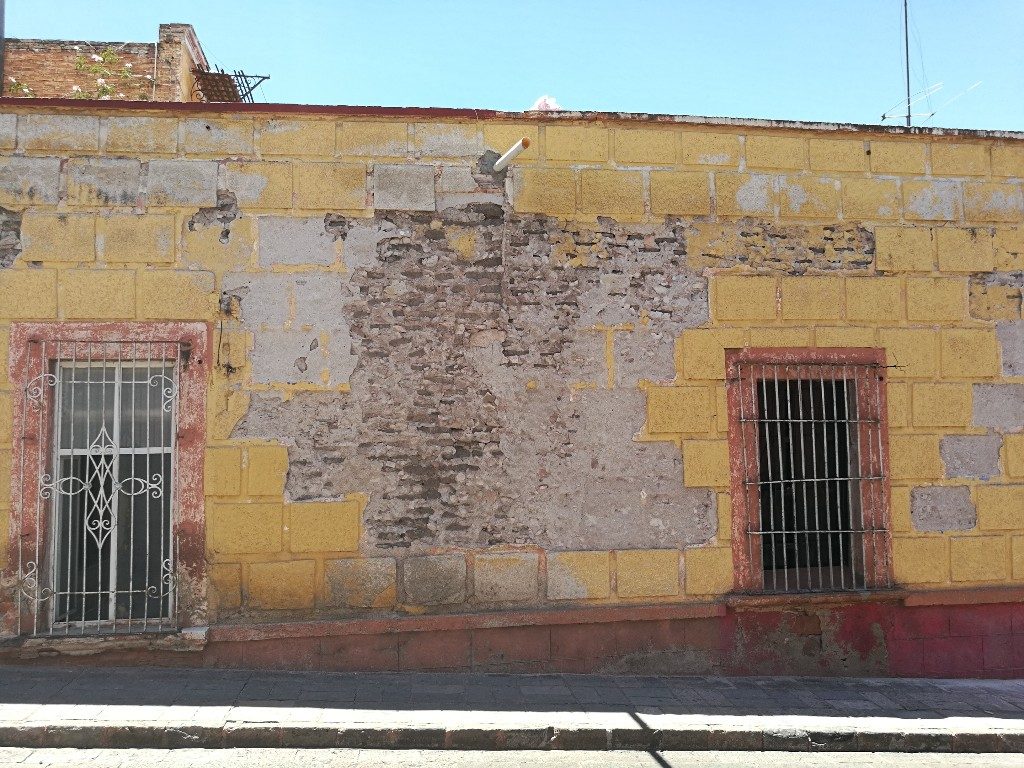 I want to find the guy who paid $350k for a beater “barn find” Porsche speedster recently. I have a building I’d ike to sell with “patina”. It is only original once! 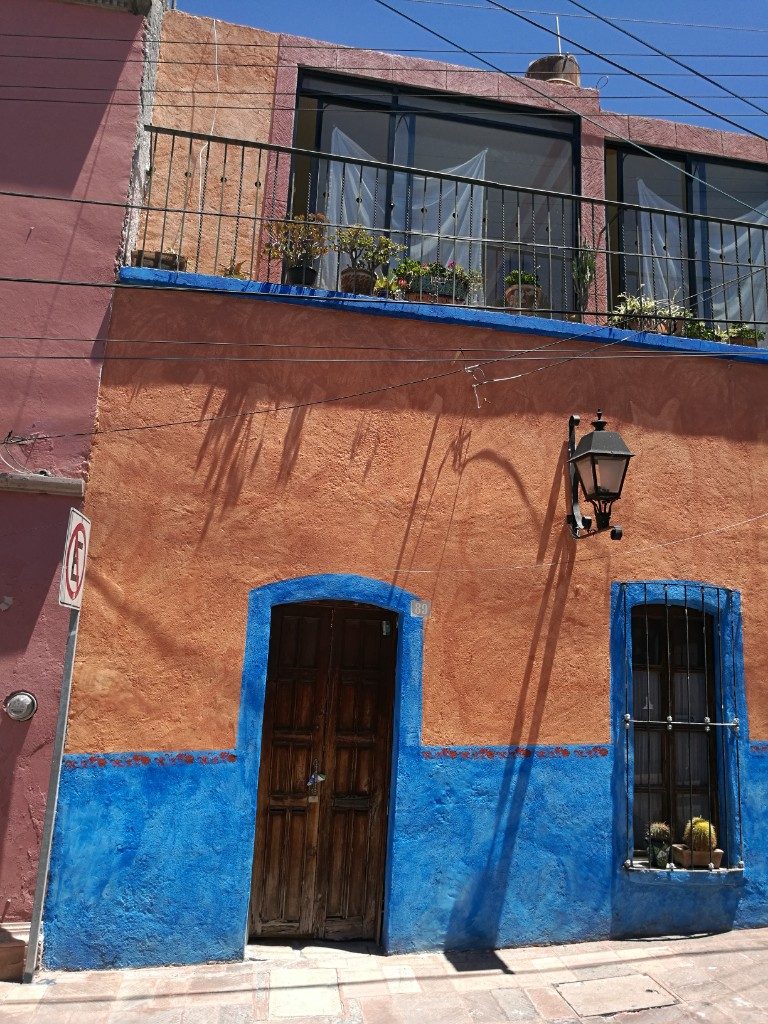 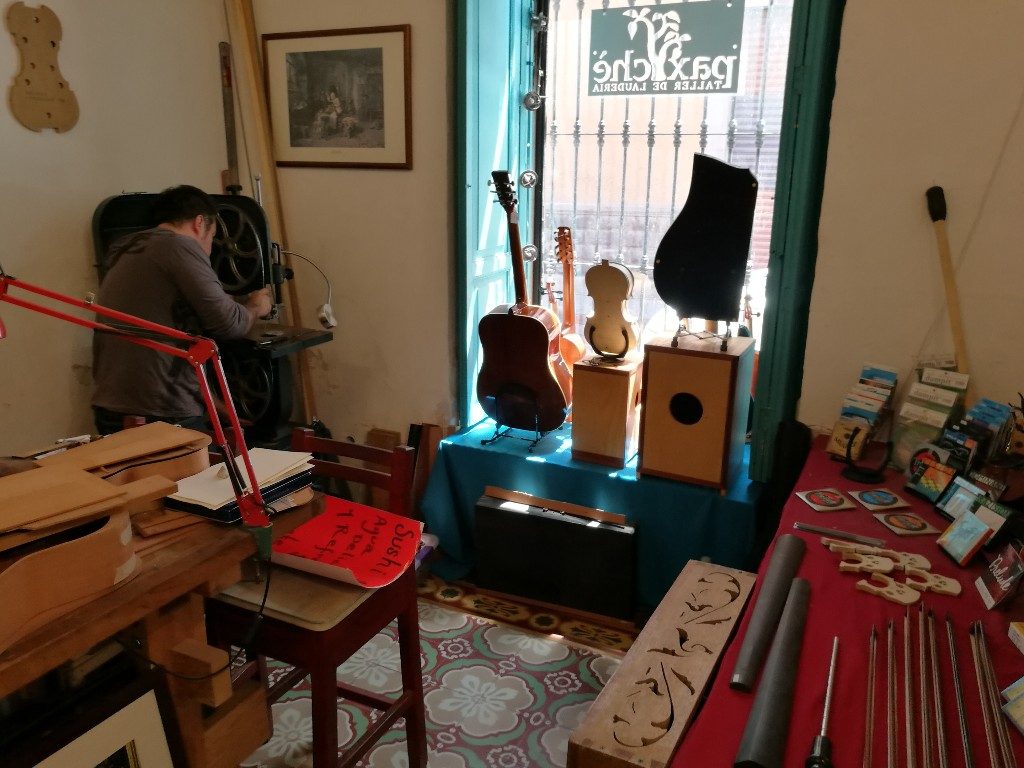 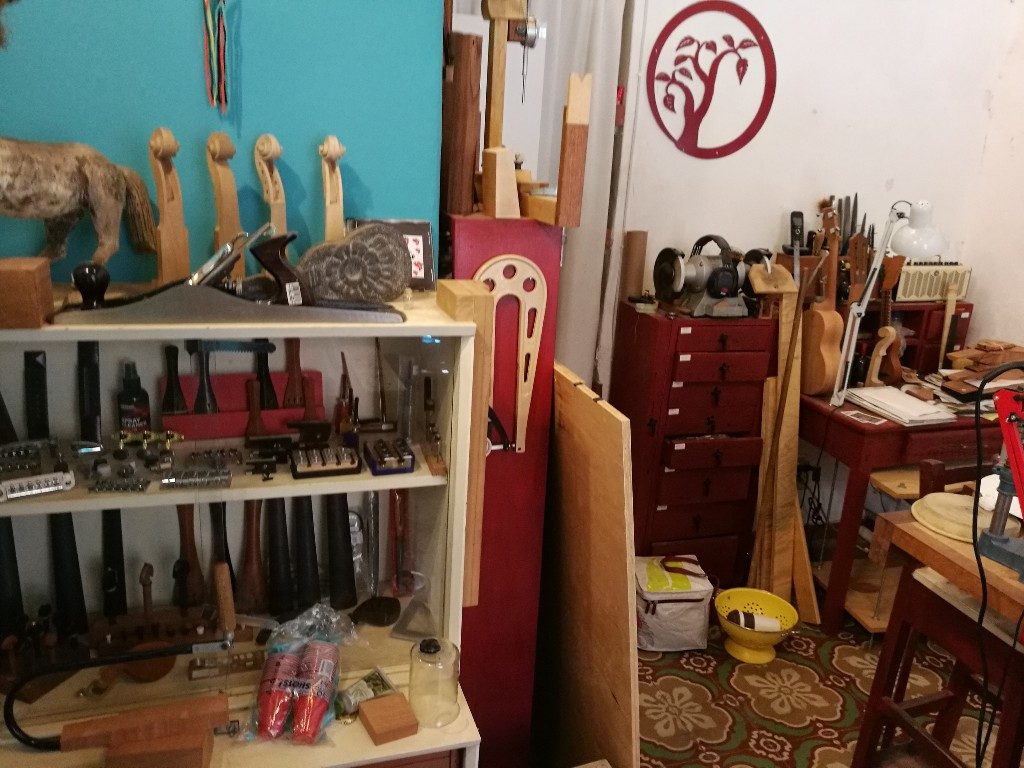 After one final day in Qro, still discovering new “tallers” (workshops) and additional plazas, it was time to move on.  We made arrangements for Uriel to pick us up early one morning for the hour-long drive to San Miguel Allende, where we would complete our travels by sharing 2 evenings with Dean and Elizabeth, who had rented a fabulous AirBnb condo not 2 blocks from the main city plaza “Jardin” in San Miguel.

Their luxurious 2 BR 2 Bath place certainly put our budget Queretaro accommodations to shame.  In fact, the place would stack up favorably against many “nicer” condos in the Austin area.. beautiful granite-countered kitchen with all the latest appliances, and sumptuously-appointed bedrooms and bathrooms. 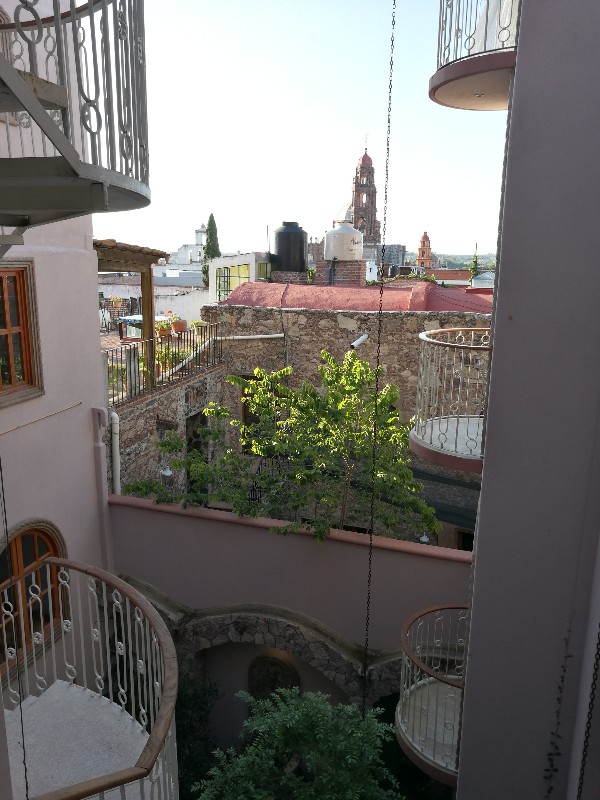 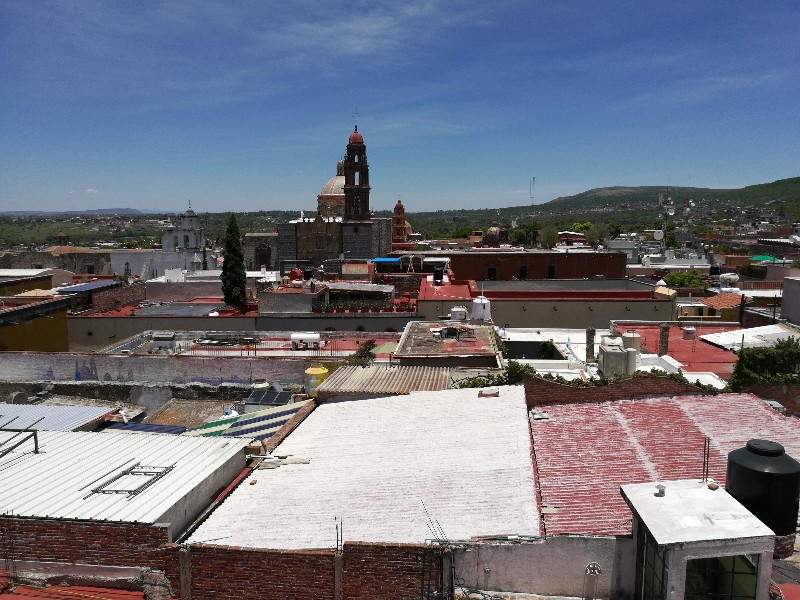 From the roof-top terrace of the condo

San Miguel and Queretaro couldn’t be any more different.  San Miguel is widely touted of being one of the more popular expat communities in Mexico, and for good reason.  It is a beautiful little city of perhaps one tenth the size of sprawling Queretaro.

The influx of tourists and permanent foreign residents to SMA in recent times have attracted all manner of “international” realtors.. Coldwell Banker, Keller Williams, Sotheby, etc., and construction of 4 star hotels and gourmet restaurants, all of which have contributed to a Carmel-esque presentation (and attendant upscale pricing) that is hard not to like.

Whereas in Queretaro it would be shocking to hear sidewalk passersby conversing in English, conversely it is all too common to hear a southern-drawling bleached blond matron speaking almost-English on the streets of SMA.  Likewise, in Queretaro, with few exceptions, you can expect to receive a spanish-only menu at your chosen restaurant, yet English-versions of “La Carta” are automatically dispersed at most eateries in San Miguel.

It could be a hard decision for future trips to decide between the infitinely more polished yet Anglo-influenced San Miguel, or the more raw, “local” environment of Queretro.  Perhaps next time we will incorporate each in our travel plans.

Dean and Elizabeth are seriously contemplating a permanent or semi-permanent residence in SMA, having visited there some 7-8 times in prior years.  They spent the better part of one day with a realtor, visiting homes for sale to get the “lay of the land”.  And they came back armed with lots of pictures and prices for our own education.  Despite purported rapidly increasing real estate prices and dwindling inventory, it was amazing to see what spectacular homes can be had in nice nearby neighborhoods at prices roughly one-half of a comparable home in Austin.  Of course, the significantly lower cost of everything contributes to the appeal (property taxes on a typical house might be $500 US/annually or so!).

We wait eagerly for their ultimate decision!

On our final evening in San Miguel, we walked to the 4-star (at least in appearance) Rosewood San Miguel Hotel, where the roof top bar is as modern and appealing as anything in metro Austin.  We designated it “The Oasis” of an Miguel, and indeed, it did seem that sunset time brought in floods of tourists and expats to appreciate the wonderful views of downtown San Miguel: 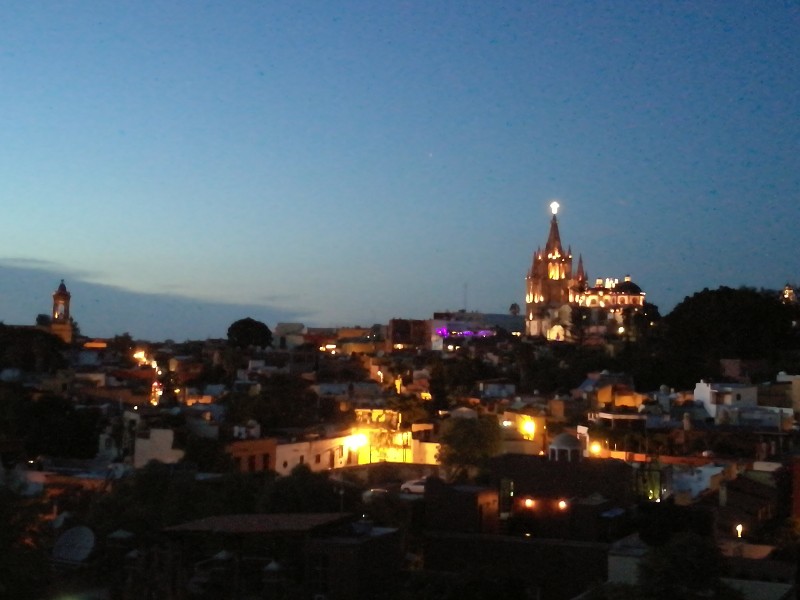 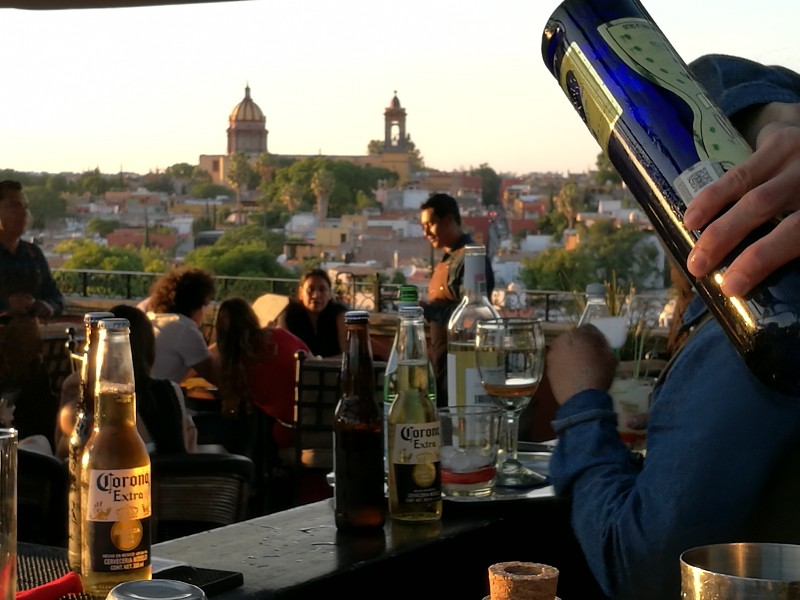 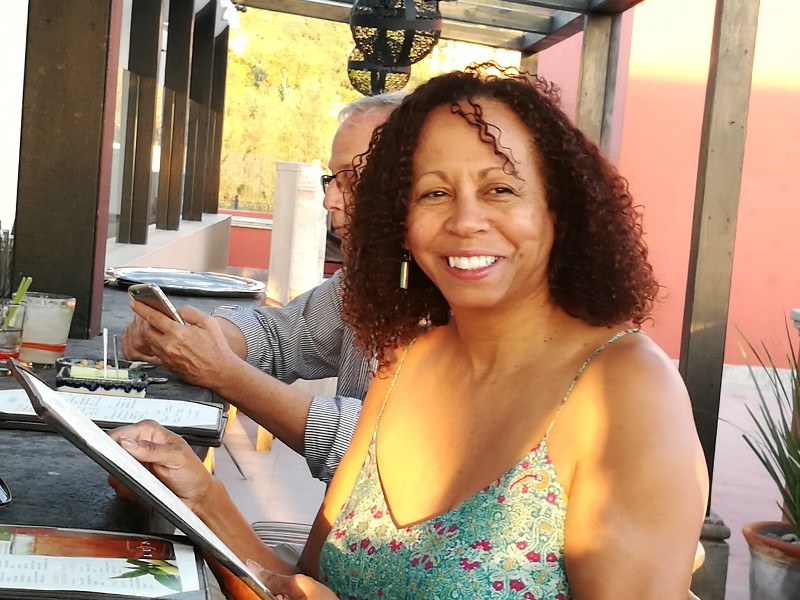 From there it was on to dinner at a wonderful Thai restaurant while being entertained by a female flamenco guitarist and vocalist.