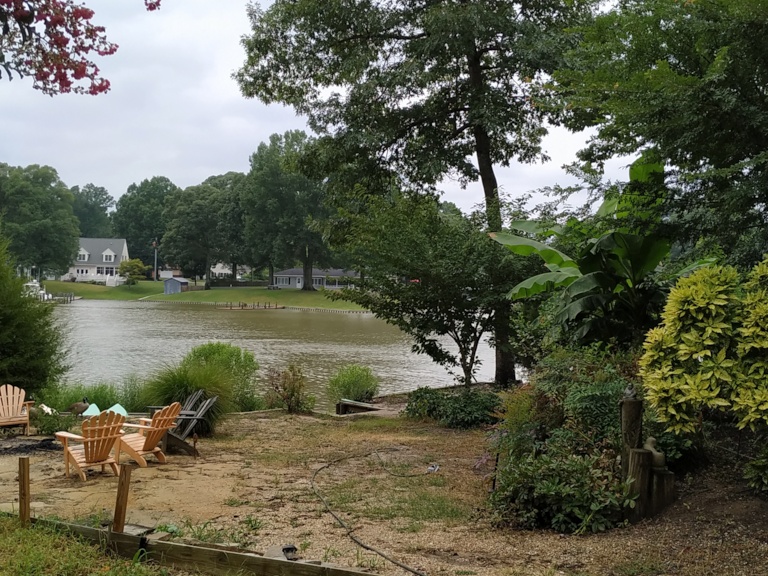 Come July of each year, Dorothee and I start scheming on ways to escape Austin’s unbearable summer heat.  For this year, 2019, we chose as our first-phase escape, to take a driving road trip to the East Coast.  This would be our second trip in our Porsche Cayman, which once again proved itself as a great road car.  The mid-engine layout provides a surprising amount of luggage space, both in the forward “frunk”, as well as a large storage area underneath the rear hatch, located behind the engine compartment. 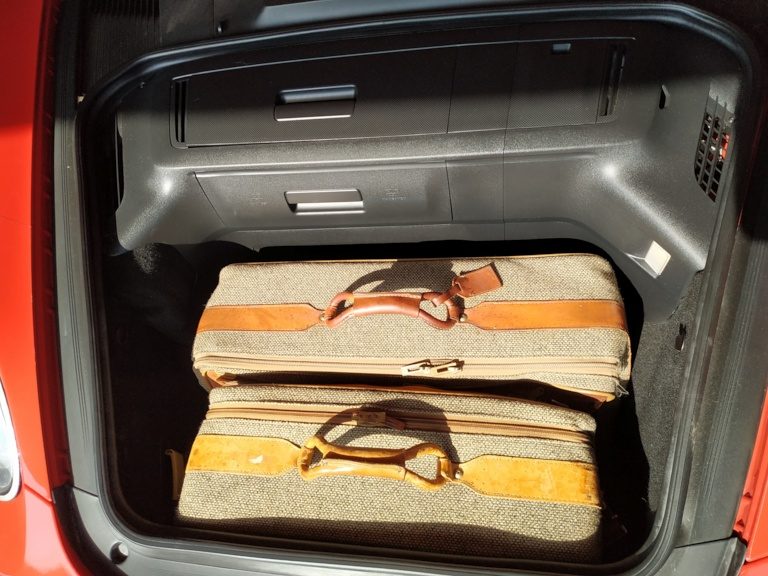 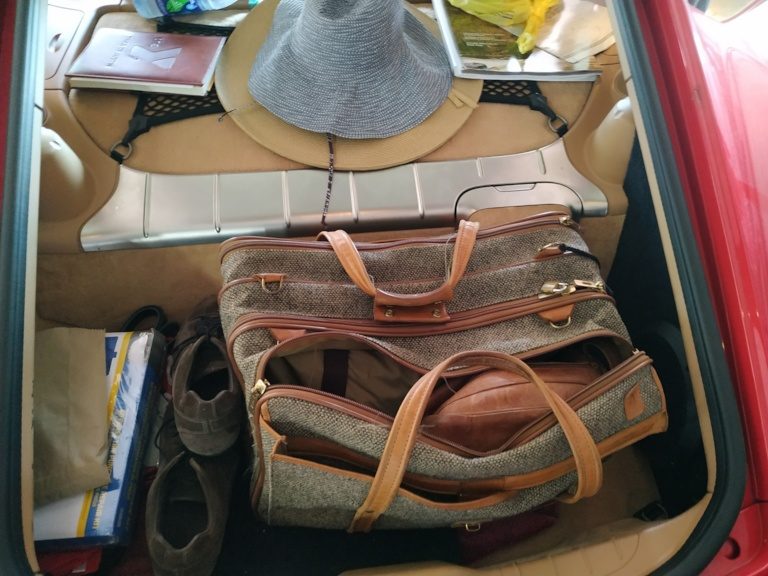 The Porsche seats lend themselves to long duration travel, while the upgraded sound system combined with Bluetooth and Android Auto connectivity provides great entertainment along the way.  Surprisingly, the ample engine yields a good 25+ miles per gallon along the way.

Our first night’s stop was at the lovely town of Natchitoches, LA, a spot I have stayed, on solo motorcycle trips, at least 2 times prior, and I wanted to share the experience with Dorothee.  I have previously documented my impressions of this area, so I won’t duplicate that here, except to say that this small town with brick-paved streets laid out along the beautiful Cane River, is worthy of an overnight.  We were fortunate to stay at the Church Street Inn, a fully renovated structure from the previous century, and located just 1/2 block from the main drag.

If you were told there exists a national park which is over 440 miles in length, bisecting the country north/south, including a beautifully paved parkway where no commercial vehicles were allowed, nor or any sort of structures, commercial or residential allowed, you would be in disbelief.  Yet, it fact, such a park exists, and it is called the Natchez Trace Parkway.  The Parkway begins just on the outskirts of Natchez, Mississippi, and terminates at Nashville, TN.  Surprisingly, few people are aware of this national treasure (at least those acquaintances subjected to my informal survey), in spite of the Parkway’s claim to be the most visited National Park, at some 5 million visitors annually.  I only stumbled onto it by accident, and have found a dearth of online information regarding the details.

What I did learn, is that the Trace trail existed thousands of years ago.  And, in more recent times, during the 17-1800’s formed the primary north-south route between areas of Kentucky, Ohio, and Tennessee and the delta states of Mississippi and Lousiana.  I found that traders of goods from the “North”, furs, grain, cattle, etc., would construct crude wooden floating, non-powered barges to transport their goods down the tributaries leading to the Mississippi River, and float downstream, finally divesting their goods at the bustling port of Natchez, on the River.  Once the journey was complete, the barge was of no further use, since there was no way to propel it back upstream.

So, traders would break up their vessels and sell the materials for local construction use.  Finished with the journey, and loaded with cash from their trip, the pioneers had just one way to get home back North, and that was via the Natchez Trace, either on foot or by horseback.

Thus the Trace became quite a busy route in those early days.  However, in 1812, the first steam powered paddle wheel “steamer” was put in service from New Orleans, and in very short order, the one-way, non-powered river vessels became a thing of the past.  Along with them, and the new availability of “quick” transport via river from south to north, the Natchez Trace quickly fell into disuse, and soon became overgrown and virtually impassable.

It was not until 1938 that the revitalized route was opened to the public thanks to persuasion by preservation activists.

The idea of driving the entire length of the Parkway was just too intriguing to ignore, so we made it the centerpiece of our first few days travel.  The 444 mile length is paved glass-smooth, relatively absent from extreme grades or sharp turns (not a single curve on the entire span that requires a reduction from the standard speed limit of 50 mph).  How could it be possible for a 400+ mile stretch of roadway be completely devoid of trucks and trailers, advertising signs of any sort, or any commercial businesses along the way?  Yet, such is the case, with only 2 cities of noteworthy size located along the entire length (Jackson and Tupelo Mississippi).

We were somewhat concerned that the 50 mph speed limit would prove tedious over 400 miles, but on further reflection, when one considers you’ll be virtually moving along at exactly that speed throughout the entire drive, without one single stop sign, traffic light, or intersection, it actually represents a great pace.  Additionally, 50 mph makes a great speed for leisurely, anxiety-free driving, affording ample opportunity for enjoying the beautiful countryside.  And beautiful it is!  The roadways are beautifully manicured in a, well, ur, “parklike” condition, and the route itself cuts right through dense forests of oak, pine, and hickory.

There were plenty of attractions along the parkway to break the “boredom” of endless verdant forests.  There was “Emerald Mound”, purported to be the 3rd largest Indian ceremonial/burial site in the US, so of course we had to make the short detour off the parkway to visit that and climb to the top.  Additionally, there was a short single-lane side detour which claimed to follow exactly a segment of the original trace.

The biggest surprise of our journey was finding the Parkway to be absolutely devoid of any other traffic, leaving us with the impression that we had this entire 440 mile route virtually to ourselves.  During our first 90 mile segment, Dorothee made a game of counting the number of vehicles we passed in opposite direction, and it was a mere 30 cars or so total! 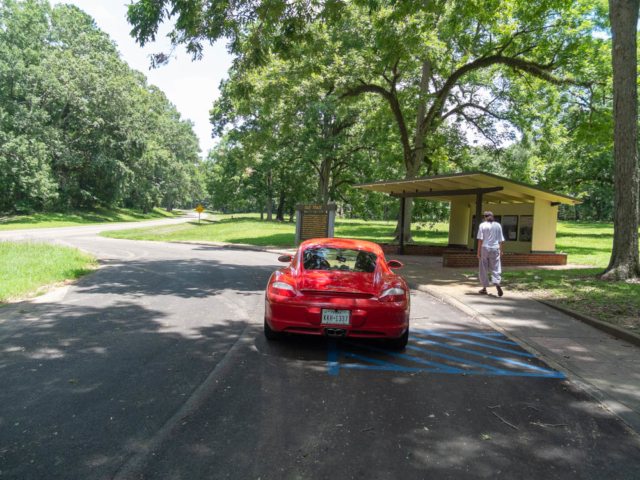 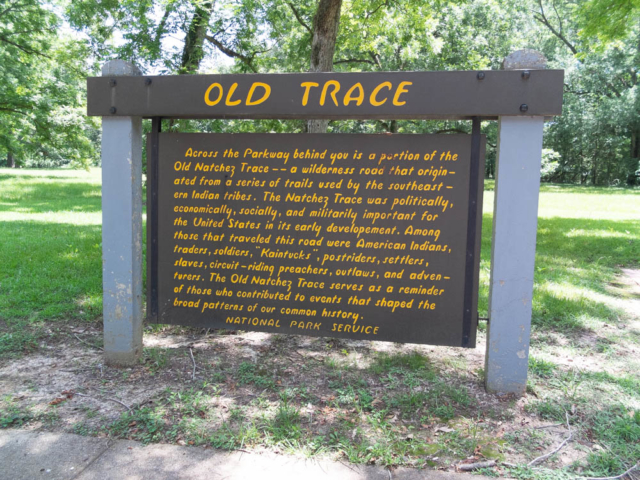 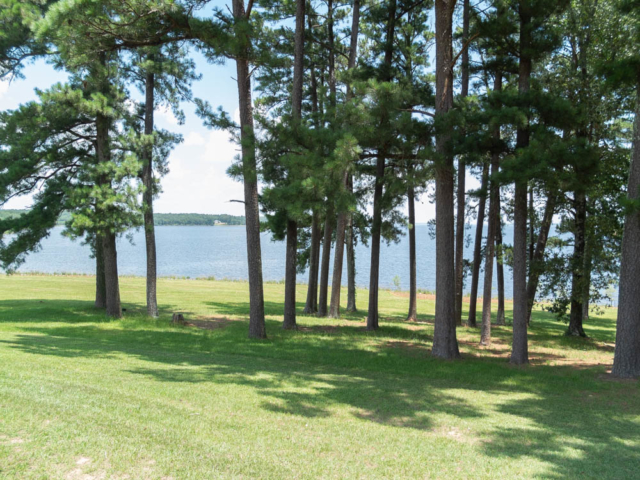 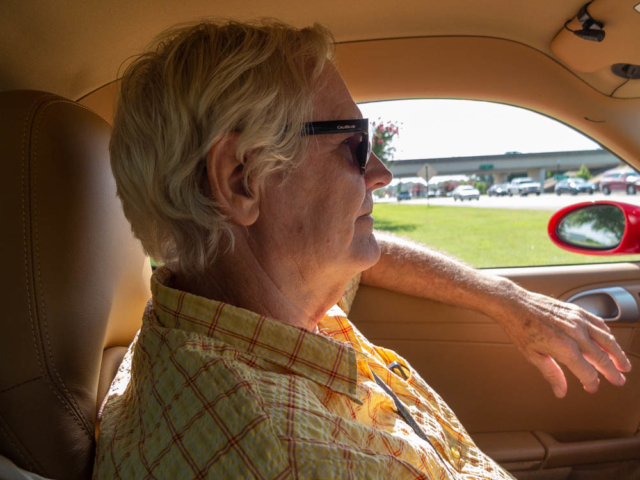 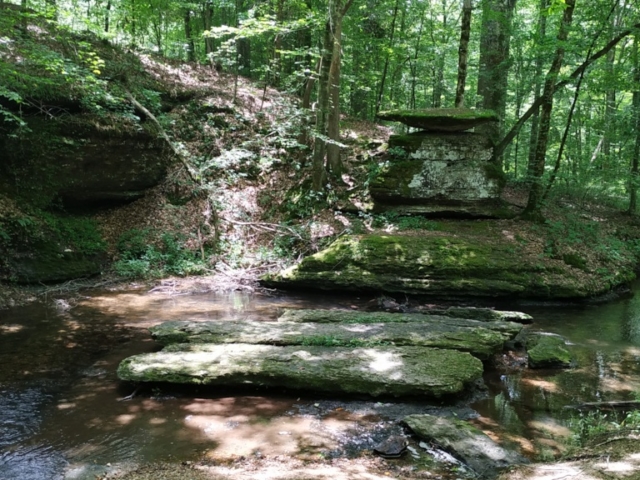 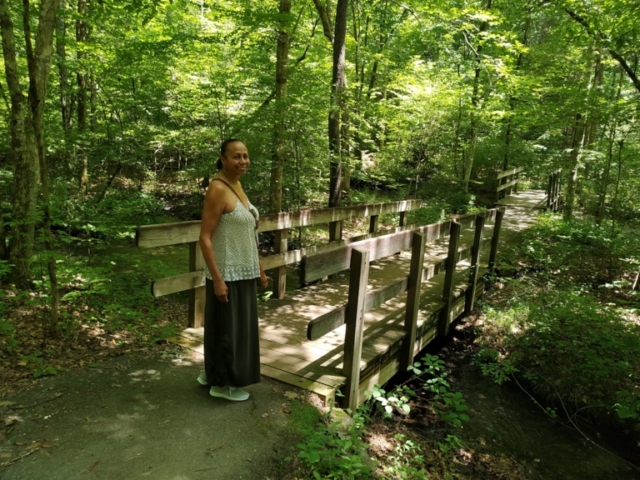 One of the few cities located in close proximity to the Natchez Trace is Jackson, MS.  By luck of the draw, we had chosen this as our second night’s stay along the parkway. We sadly found Jackson in general to be the armpit of Mississippi, if not of the entire United States.  Honestly, not a city that the average citizen would be proud of.  However, Jackson, a city of virtual ground zero during the rampant civil rights violations during the 60’s, has made a noble attempt to exonerate itself from its many crimes by building the beautiful, impressive, and sobering “Civil Rights Museum” right near city center.  Of course, that was a must stop for us: 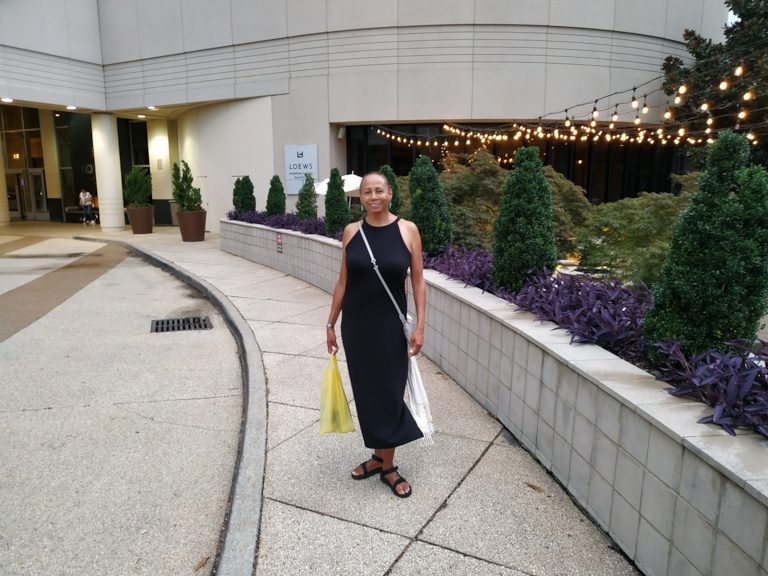 The most heart-rending museum display for me was a large room that consisted solely of walls covered with lists of black victims who were lynched throughout those shameful years, along with their purported “crime”.  Here is just one very small panel.  Take a few moments to read through it.  Washington Adams – 1938 – Offense Overdue Debt; Washington Wright – 1949 – Offense “Hogging the Road” : 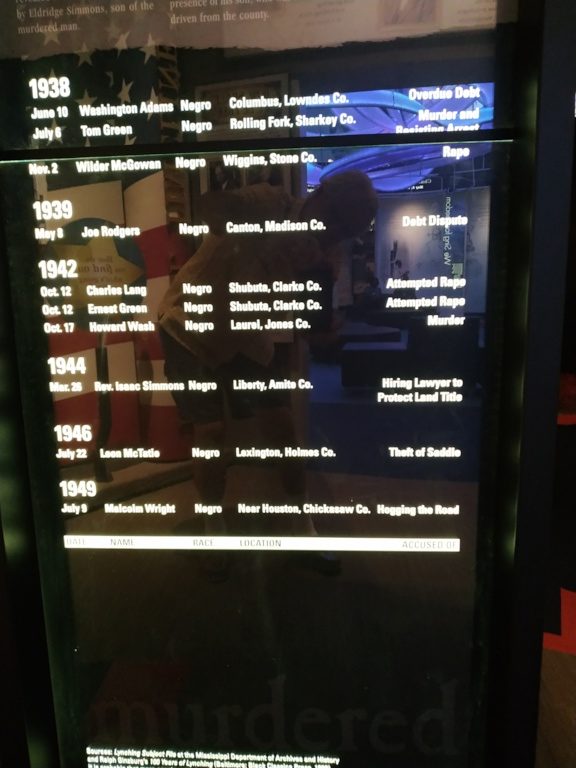 The room was filled with lists such as this, and I found it to be as emotional as visiting the Vietnam War Memorial in D.C., yet even more disturbing, as each of these victims suffered at the hands of their own fellow citizens.  I became so overcome that I had to rush out of the display into the nearest bathroom, where I locked myself in a stall and just sobbed for minutes before I could return.

Of course, the election of Donald Trump, and the support he has garnered for his actions against Mexicans, religious faiths other than Christianity, and, not least, his absurd clinging to the “birther” issue, makes it clear that racism is alive and well in our country.  I suspect part of the problem is the eroding of the so-called “middle class” some members, now numbering in the millions… consisting of losers and underachievers whose only hope is to find another category of humanity they can look down on in a fruitless attempt to bolster their own self-esteem.

Just about my favorite place in the world is my friend Tom Ryal’s beautiful garden estate on the outskirts of Reedville, Virginia.  His property is right on the banks of an inlet opening up to Chesapeake Bay.  Tom is an avid gardener, and he has transformed his tree-studded property into a virtual garden of Eden.  For the past few years, Tom has operated a BnB at his house, and has a steady stream of avid visitors almost every week.  His portfolio of glowing 5 star reviews on the reservations site tells you all you need to know about this universally-loved and unique guy.

Hanging out at Tom’s has to be one of the most relaxing activities man could aspire to! 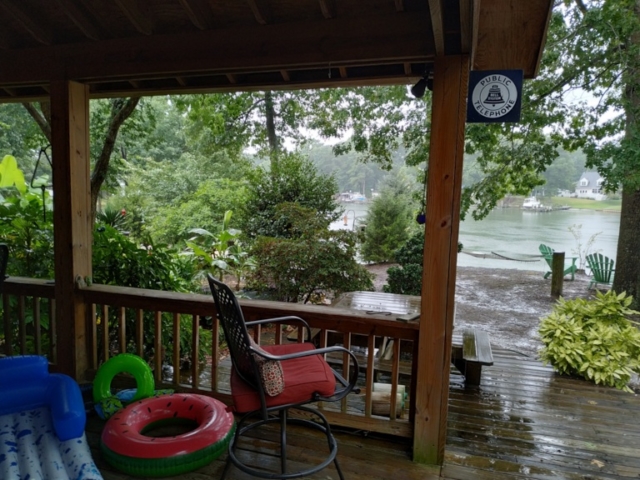 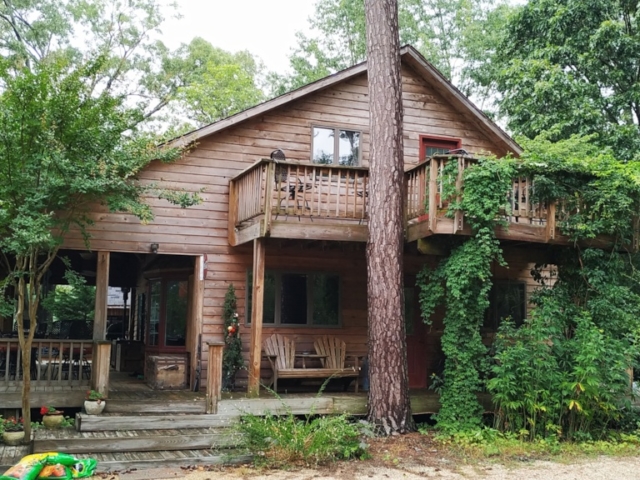 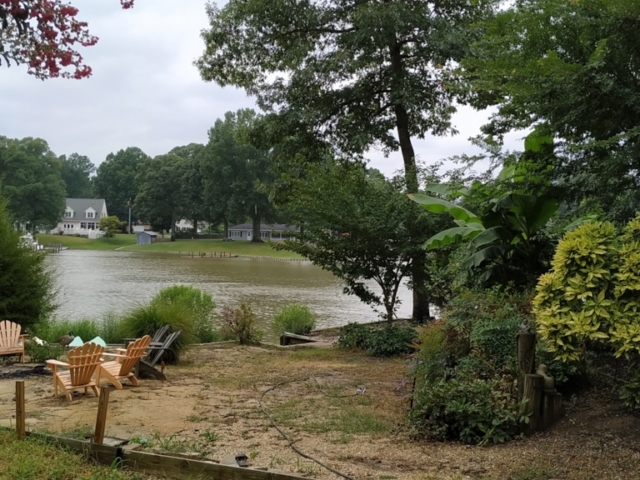 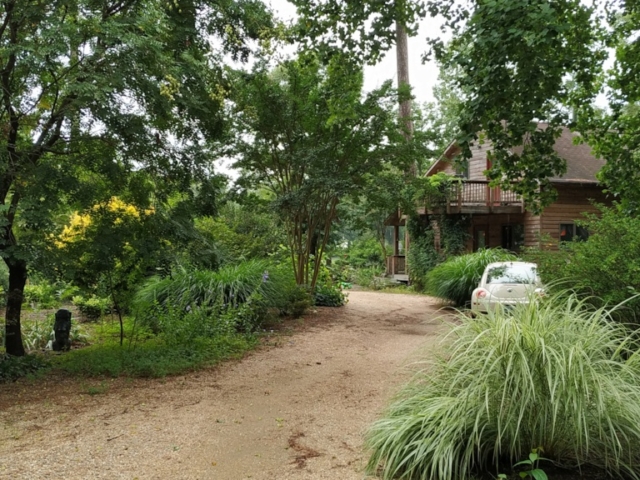 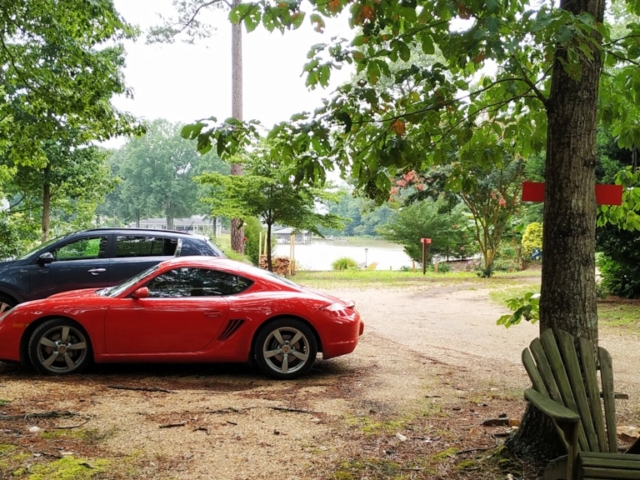 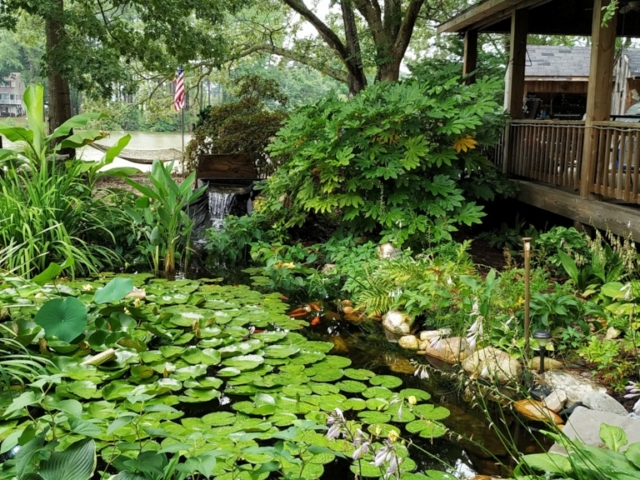 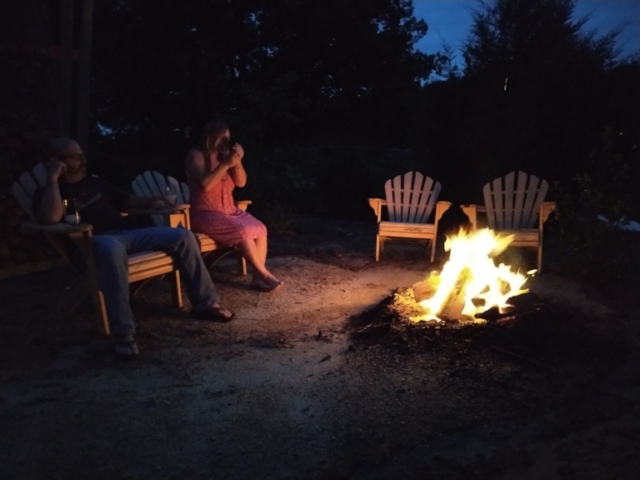 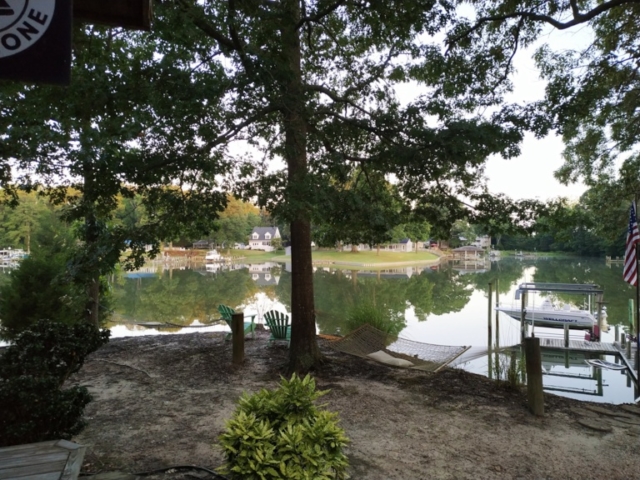 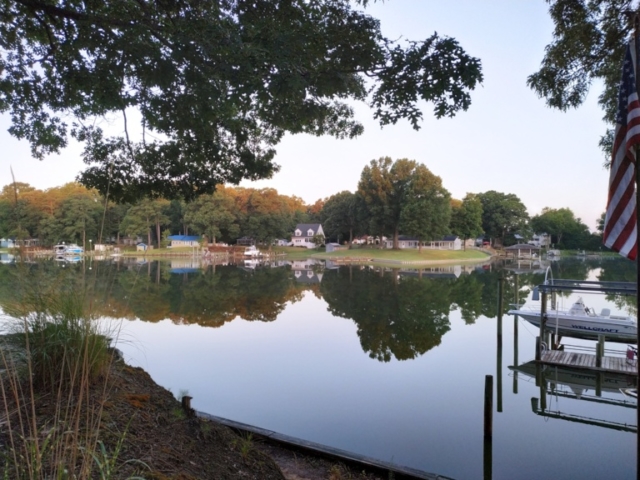 On July 5th a friend of Tom’s, Sharon,  who owns a marina as well as a waterfront home, invited us over to watch the fireworks display from across the bay.  Honestly, the show far surpassed the big metro show we had watched the previous evening in Nashville, TN: 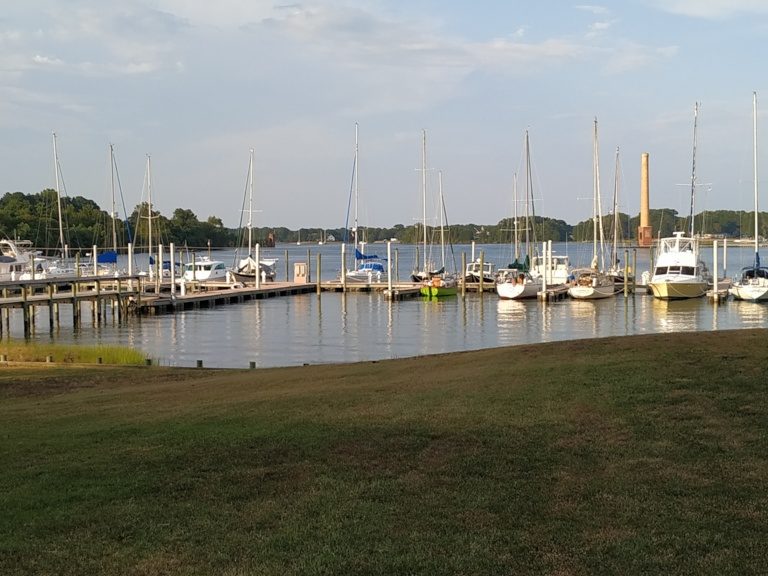