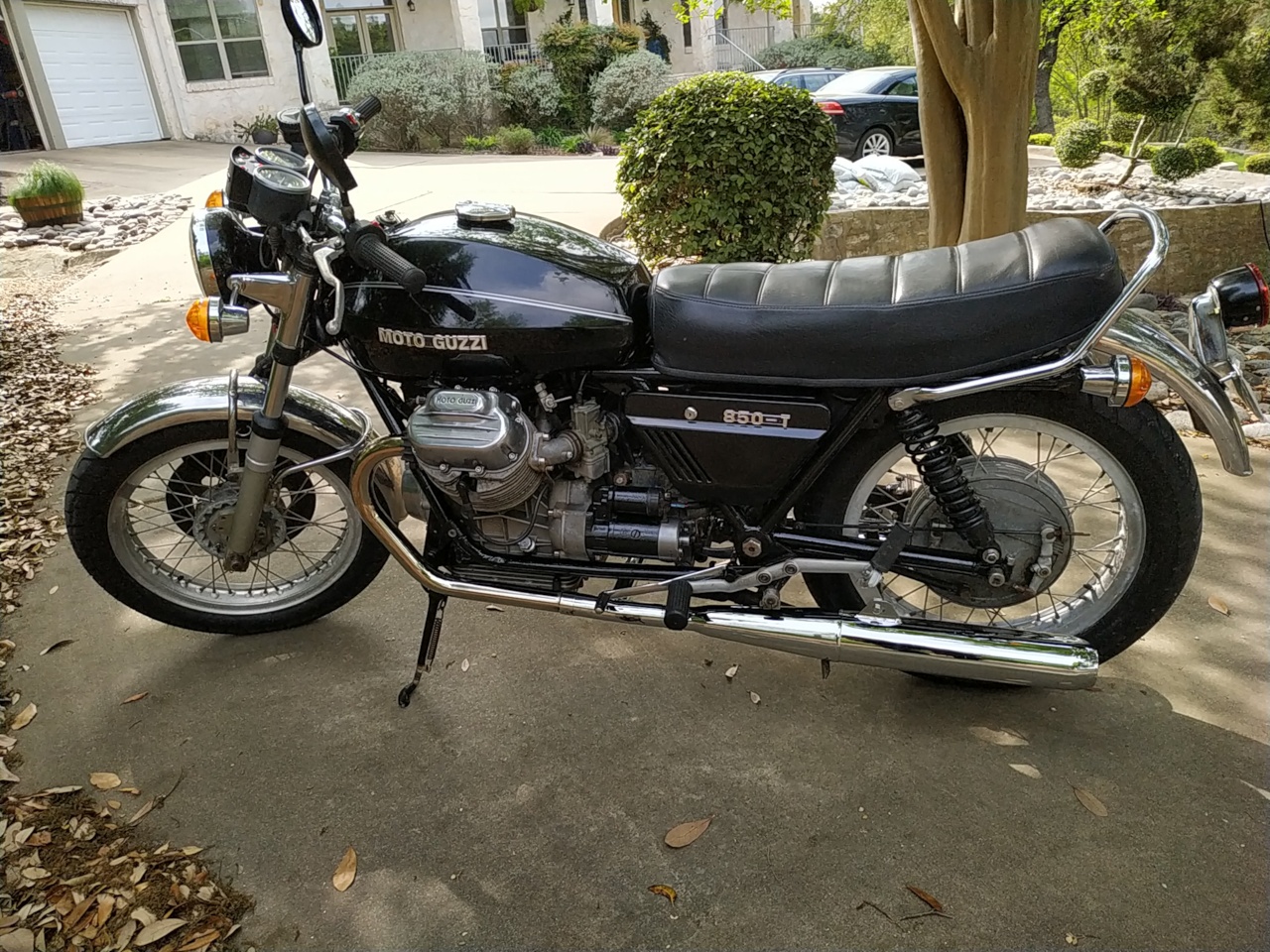 I’ve always been a sucker for a perceived bargain.  Time and time again, I’ve chased after a promising “deal” (car or motorcycle), and just as surely have suffered the rude reminder of the old adage “you get what you paid for”.  Yet, in spite of years of “lessons learned”, I seem to persist in pursuing my unattainable quest.

My most recent “steal” came about somewhat by accident.  During a routine browse through the motorcycle section of eBay, I spotted a classic(?) Moto Guzzi listing for which bidding seemed to be languishing at a value I judged to be sub-par.  I’d owned a Guzzi before, a 10 year old California cruiser, and loved everything about it, but due to my short attention span, eventually turned it over to a new caretaker.

The “new” bike in question was a 1975 Moto Guzzi 850T model.  Adding another bike to my “collection” was hardly necessary, wise, or convenient, but memories of the unique qualities of that previous Guzzi (encouraged by the siren song of LOW PRICE) piqued my interest.  Before proceeding further with my story though, for the uninitiated, perhaps a brief examination of the Guzzi marque would be in order.

Moto Guzzi was established in Mandello del Lario, Italy in 1921, and has earned the distinction of being the oldest European manufacturer in continuous motorcycle production. Like most early bike firms, the engine and frame designs initially ran the gamut… engine designs of single cylinder, twin, semi-flathead (Exhaust over intake) of various sizes, and even a brief production of a complex V8 engine designed for GP racing.

It was in 1967 however, that the iconic engine layout that has since been the recognizable feature of all Guzzi’s was designed.  It was a unique design (only copied, to my knowledge, for a brief time  by Honda with their CX series) featuring a 90 degree V twin mounted transversely in the frame (vs. the more common longitudinal V configuration):

This transverse layout, similar to BMW’s 180 degree “flat” twins, lends itself most readily to an enclosed shaft drive to the rear wheel, in contrast to the more common chain and sprocket configuration for bikes with the crankshaft installed perpendicular to the rear wheel.  The transverse design also contributes to an “endearing” trait known by Guzzi (and BMW owners) in which a sudden increase in engine torque (a blip of the throttle) results in the frame reacting to gyroscopic forces with a slight but noticeable movement in the opposite direction, similar to the twisting torque a single engine airplane pilot experiences upon application of power.  It’s nothing of significant effect, but a curious footprint of this layout.

The basic V twin layout is one employed in many configurations by any number of bike manufacturers, in both transverse and longitudinal frame placement. Two pistons sharing a single crankshaft throw, as depicted above, is common. Therefore one might be forgiven  in assuming a V twin such as the venerable Harley Davidson is a close cousin to the Moto Guzzi design, but that assumption would be incorrect.  The Harley engine is designed as a 45 degree twin, vs the 90 degree layout of the Guzzi engine.  Why is this difference significant? At an angle of 45 degrees (Harley) once one cylinder fires, the crankshaft then has to rotate a full 270 degrees before the second cylinder fires.  This produces a lumpy, vibration-prone ka-pock-eta-pock-eta-pock-eta ride, apparently revered and appreciated only by Harley Davidson devotees.  The remainder of the biker universe prefer an engine with firing pulses more evenly spaced (Moto Guzzi) for a smoother ride and actual visibility through the rear view mirror!

To my (limited) knowledge, Moto Guzzi, since initial development of the overhead valve V twin by Giulio Cesare Carcana, has produced V twins of this design exclusively throughout current times. Of course the engines have been continuously improved over the years, most notably with a major redesign in 1971 by engineer Lino Tonti.  Engine sizes have varied over the years, but the basic design and visual appeal remain to this day.

My bike, the 1975 850T model, was one of the first to utilize the somewhat unique and highly regarded “Tonti” frame (designed, of course, by engine designer Lino Tonti as well).  It features removable lower frame tubes, which utilize the engine itself for structural rigidity, and allow the entire engine and transmission to be removed from the bottom of the frame. All this knowledge I gained, of course, in true fashion, AFTER purchasing this bike!

But, enough generic background! Let’s talk about the latest addition to my motorcycle garage…

“Well sorted by a retired Moto Guzzi dealership mechanic”  was the headline banner greeting a viewer of the eBay listing for “my” Guzzi.  That comforting statement certainly influenced my buying decision, encouraging me to overlook the obvious physical needs of the bike, which were noticeable even in the  dark photos provided with the listing.. rusty exhaust system, and rusty hardware being most noticeable: 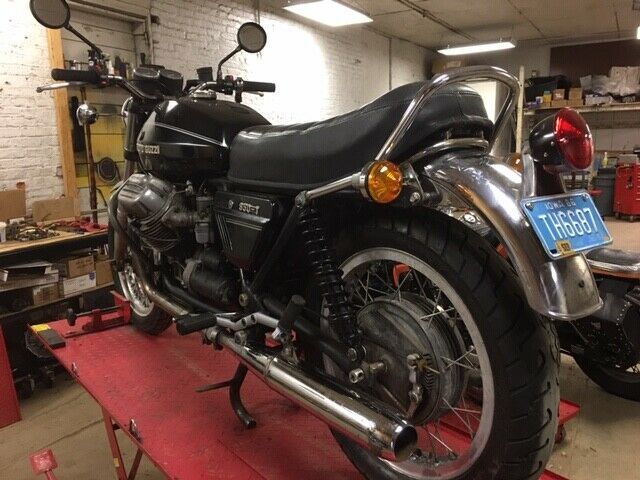 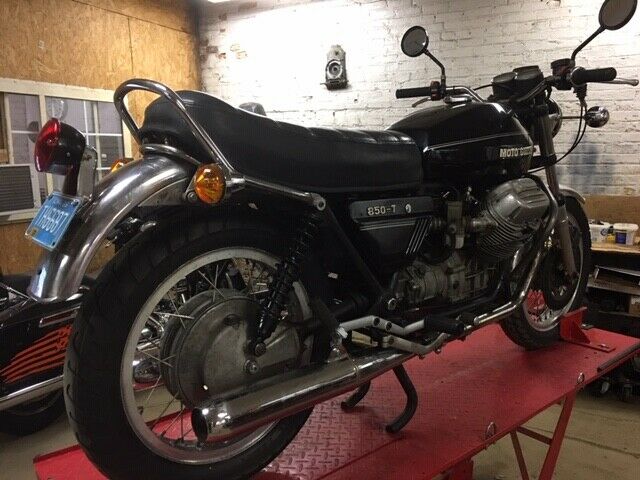 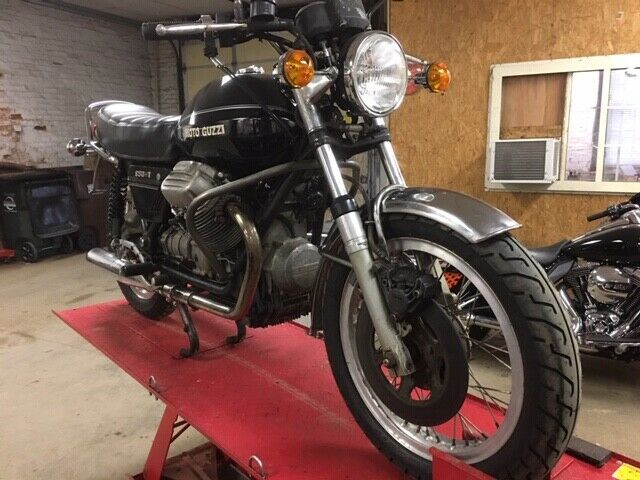 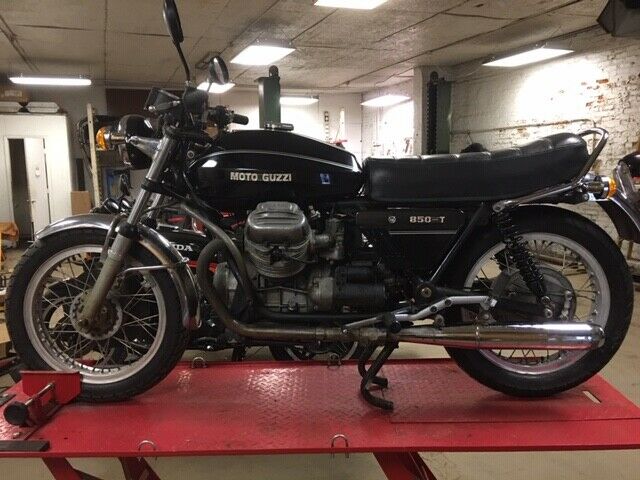 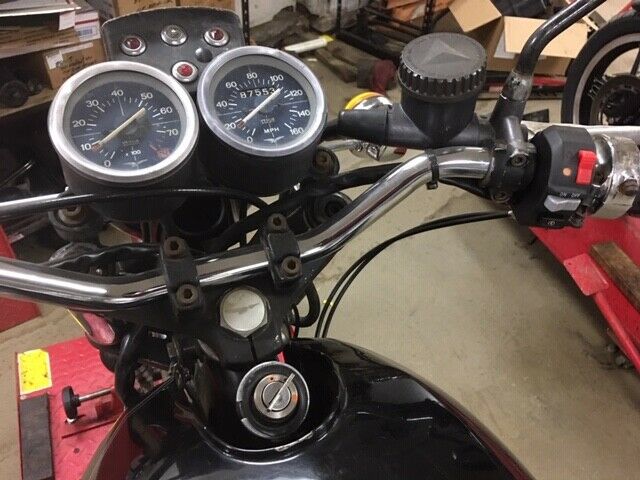 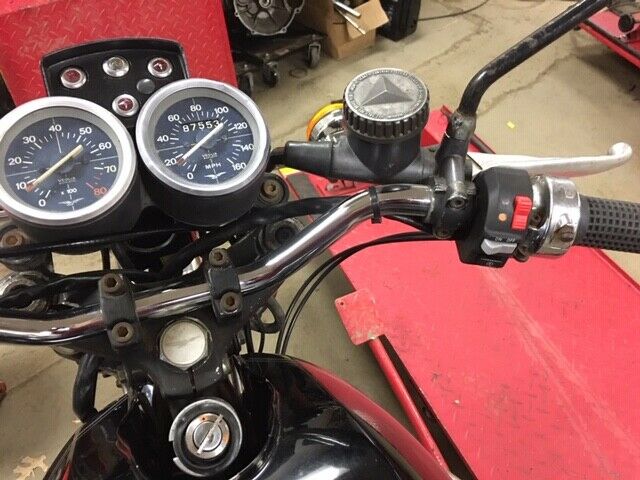 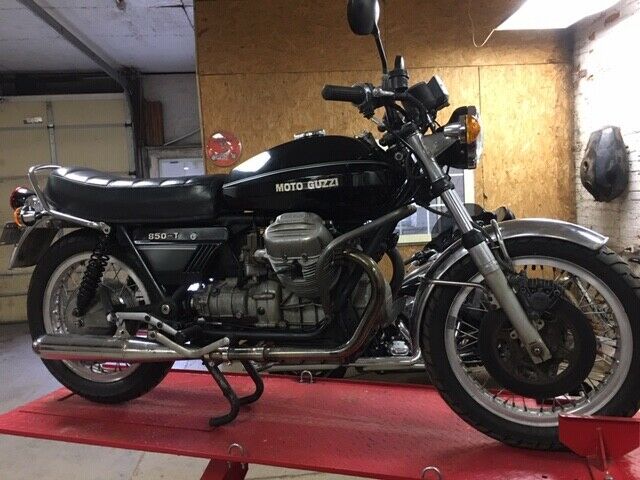 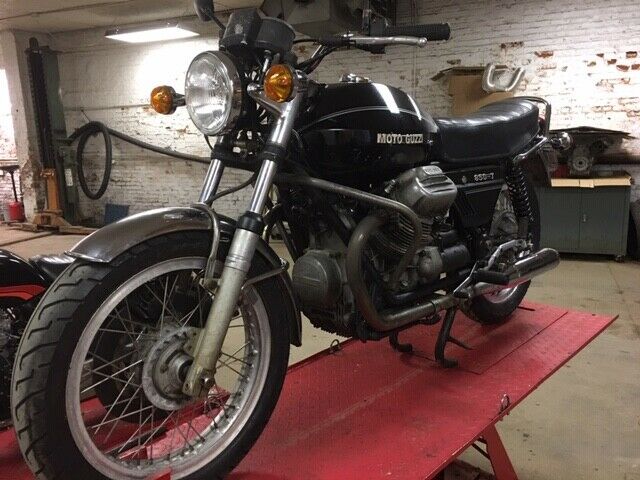 On the other hand, the P.O. (previous owner) did state a number of recently added improvements: new tires, new headlight and turn signals, new handlebar and switch gear, and new throttle clutch cables.  What could go wrong?

Therefore, I decided to take the plunge, and barged ahead.  Following my usual M.O. for eBay bidding, I waited until literally the last 10 seconds prior to the auction closing to “show my hand”.  Bidding had stalled at a reasonable $2,700 with no reserve, so someone was going home with this bike.  For the uninitiated eBay observer, a bidder can enter any amount as his/her high bid, and the system will only set your bid at the minimum amount needed to top the current visible high bidder.  That means that the current high bid could be backed by an even higher bid if another bid comes in.  I decided the maximum I’d be willing to spend would be $3,150.  At the 10 second point, I pushed the button for my high bid, and likely, before any other watchers/bidders could respond, bidding was over and I had won the auction at an even $3,000.  That means the previous high bidder had posted a maximum, hidden bid, of $2,950, so the bike was mine!

My subsequent, pre-arrival communications with the seller were amicable, and I was assured that the bike had been ridden regularly, and would need nothing upon arrival.  Was I ever surprised!

It was a full month later that my chosen transport company finally arrived at my gate with the “new” Guzzi. Its arrival heralded the beginning of a huge laundry list of discrepancies, some major, some minor.

My first clue that this new acquisition wasn’t going to be a cakewalk in the park revealed itself immediately as the bike was unloaded from the transport.  I noticed right off that the front forks/handlebars just flopped right over without restraint in both left/right directions, hitting the tank with potential for damage.  EVERY bike has some sort of restraint/stop to prevent movement of the fork beyond a certain deflection in each direction, to insure there is no fork-to-tank contact.  A quick visual examination revealed that the metal stop that should have been welded or cast into the frame, had broken at some point, and had never been repaired! (More about my solution later)

With the bike on the ground and in my garage, it was time for a rudimentary inspection (oil levels, air levels, fuel, etc) and then take the old gal for a ride.  It took just a short ride to reveal a number of immediate deficiencies:

Sigh!  No “ready to ride” for me!  In order, I addressed the above issues:

CLUTCH… It turned out that when the P.O. had replaced the clutch lever, apparently it was an after market unit without the appropriate amount of deflection.  The new cable he had installed did not allow proper adjustment of clutch release, even with the adjustment nuts at EACH end of the cable adjusted to their absolute maximum limits, the clutch wasn’t properly and fully disengaging.  On further investigation, I discovered the first of the many “shade-tree-mechanic” approaches this guy had employed to cobble this bike into “saleable” condition”

In a failed attempt at increasing adjustment length, this guy had just slipped a slotted washer over the cable housing ferrule to give it more length: