Nothing can be more tortuous than spending a July or August in sweltering Austin.  Last summer we vowed we would find a cooler locale.  We finally settled on Queretaro, a lovely city situated in Central Mexico, about a 3 hour drive north of Mexico City.

Queretaro couldn’t have been a better choice in our quest to beat the heat.  We arrived mid-afternoon on July 9 to find the temperature to be a wonderful 75 degrees (and that seems to be the norm here, due to the city’s 6,500 ft elevation).

Thanks to Uber (and the current 20 pesos/1 US dollar exchange rate), a 5 minute wait and roughly $10 sufficed for the 30 minute ride from the airport to our AirBnb digs right in the heart of the historical Centro section of the city.

Our 3 br “house” would best be most favorably described as “functional”, but we did find it to be clean, secure, cool (even without A/C) and best of all, within walking distance to everything. 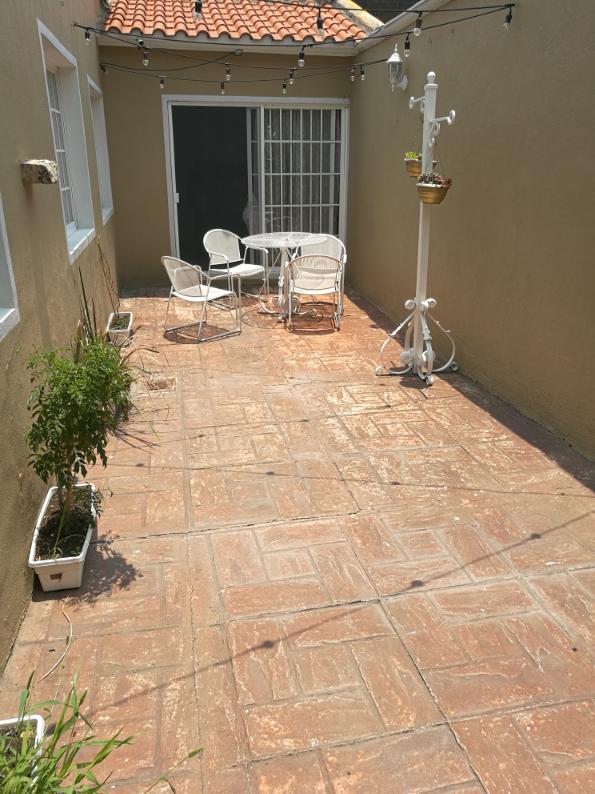 In fact, we are literally one long city block from Avenida Universidad, which borders the Rio Queretaro, which conveniently dissects the city.

After a brief rest to recover from our flight, we struck out on foot toward the beautiful Jardin Zenea, where we were pleasantly surprised to see a big brass band performing on the covered gazebo in the plaza: 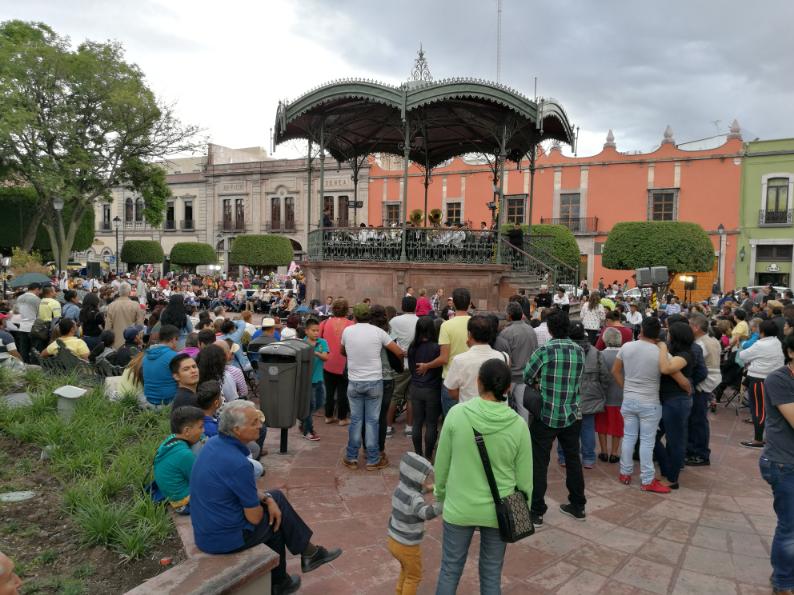 We are thrilled to find that Queretaro is an “outdoors” city, with residents of all ages pouring out into the streets daily.  It feels just right.. plenty of people to feel safe at all times, but rarely standing room only or need to stand in line for services or dining.

Jardin Zenea will prove to be our favorite plaza, but the choices are endless, with the entire Centro section populated with block-square plazas, almost around every corner. 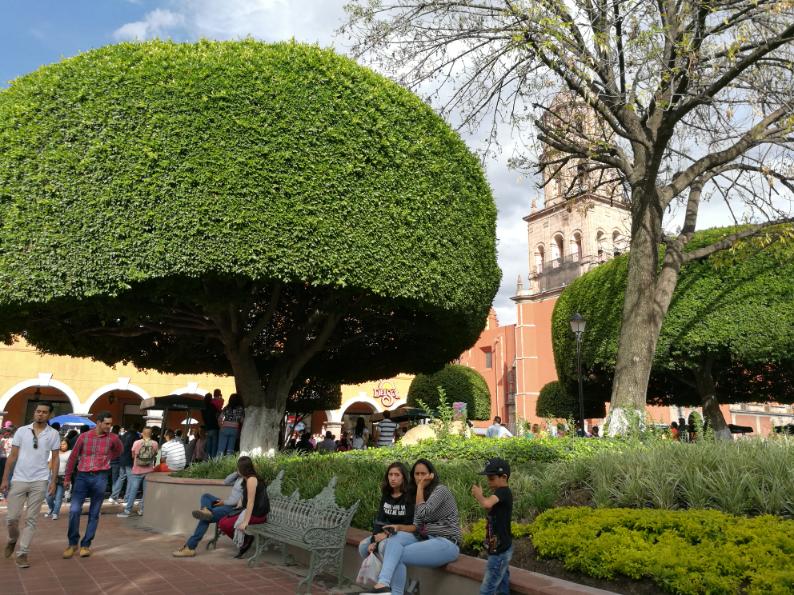 At first glimpse, especially in the immediate vicinty of our accommodations, one might form the impression of Queretaro as a city of poverty.  Our residential area is defined by narrow streets, frequently one-way, and even narrower sidewalks generally too narrow to pass an opposite direction pedestrian.  And the exterior of most of the “houses” consist of windowless walls and sturdy iron doors. 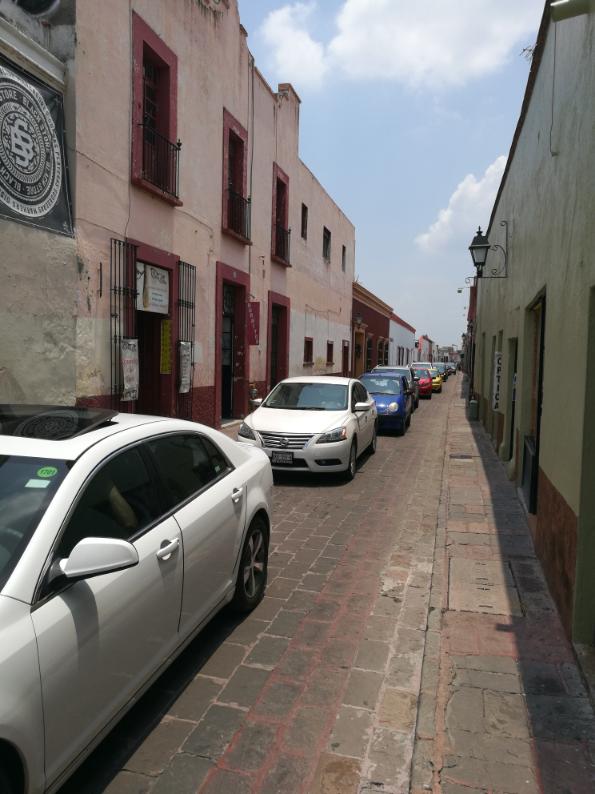 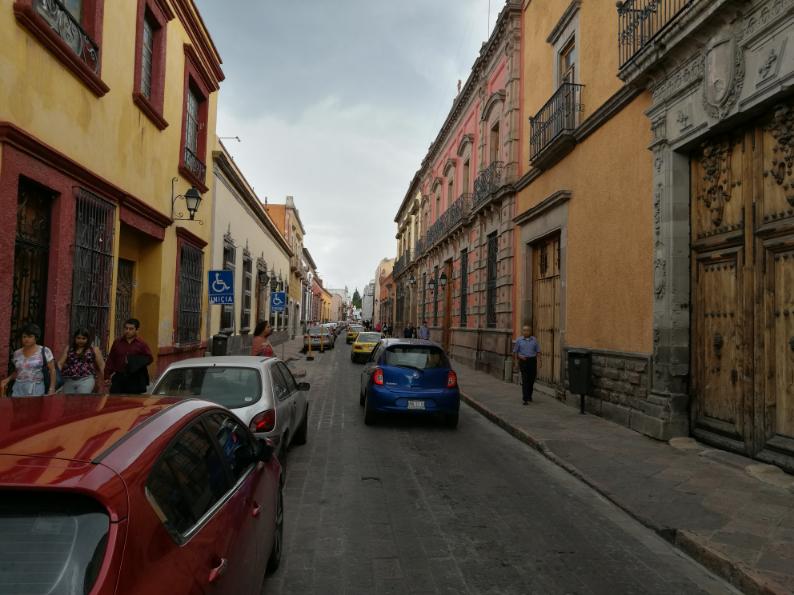 But once inside the residence, there are interior courtyards and/or skylights as is the case with our “home”.

The longer one examines the city, the more vibrant and relatively prosperous it appears.  Most of the vehicles on the streets are of late model, not all that different from what might be observed in Austin.  Yes, there are those scraping by on subsistence incomes, but then we have our share of beggars in Austin as well. 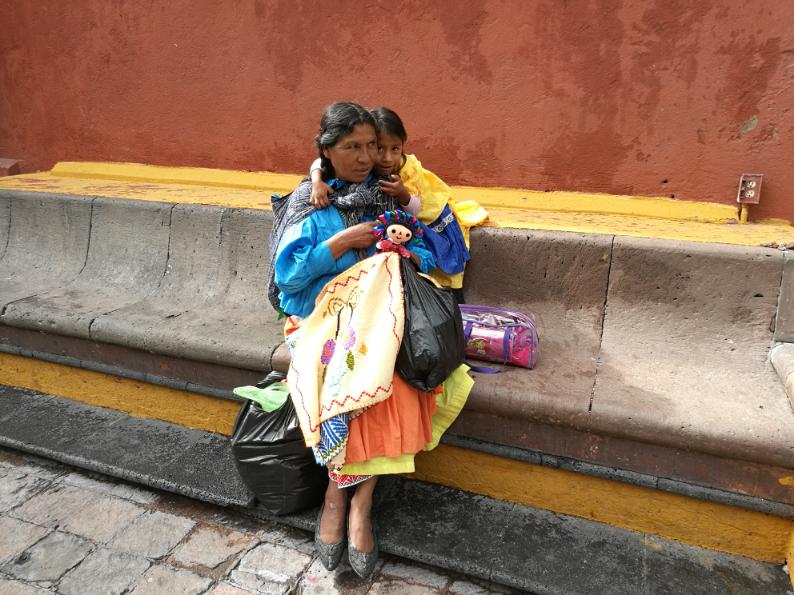 I hesitate to use the word ‘beggar’ to describe the small number of street people, as virtually every one (frequently women) are selling something.. little ribbon dolls, flowers, etc.  And I find it difficult to pass by one without dropping a coin in their hands.

Today we met “Uriel” a bright young fellow riding his bicycle advertising city and area tours by bike, car, or even airplane.  Uriel spoke very articulate English, and was so personable that in short order we had agreed to a following day personal afternoon tour of the city by car (our biking days are apparently over).

The remainder of the day found us comparing Queretaro (favorably) to European cities we have visited in the past.  In fact, it bears many resemblances to the lovely Spanish city of Zaragoza, not far from Barcelona, where we spent the better part of a week 2 years ago.

In many ways, facilities in Queretaro seem far superior to that of Austin.  Think of it… where is a single, block-square plaza anywhere in Austin?  And Queretaro has almost too many to count!  The streets and sidewalks in the Centro are ALL constructed of a unique kind of stone tile and paver, somewhat resembling granite, which is quarried nearby.  Best, every inch of the streets and sidewalks are swept clean daily by a squadron of street workers, leaving a spiffy clean environment everywhere you go.

Then there is public WIFI available in virtually every public outdoor space, easily accessible without hassle.  C’mon Mr. “High-Tech” Austin, you are falling behind!

Finally, there can most certainly be expected to find numerous free concerts every single evening (eat your heart out, $1,000/ticket ACL!)

We are beginning to see that there will be ample adventures for us within our walking range, as the possibilities seem endless.

We are beginning to settle in to a workable daily schedule:.. up and on the streets reasonably early, while it is nice and cool.. off to discover a new breakfast locale then explore more streets, then back for afternoon siesta until heading out just before dark to experience all the excitement the city has to offer after dark.

Today we walked to La Casa De La Marquesa, once the residence of, well, the Marquesa, and now converted into a 13 room beautifully appointed hotel.  We virtually had the dining room to ourselves for our desayuno. 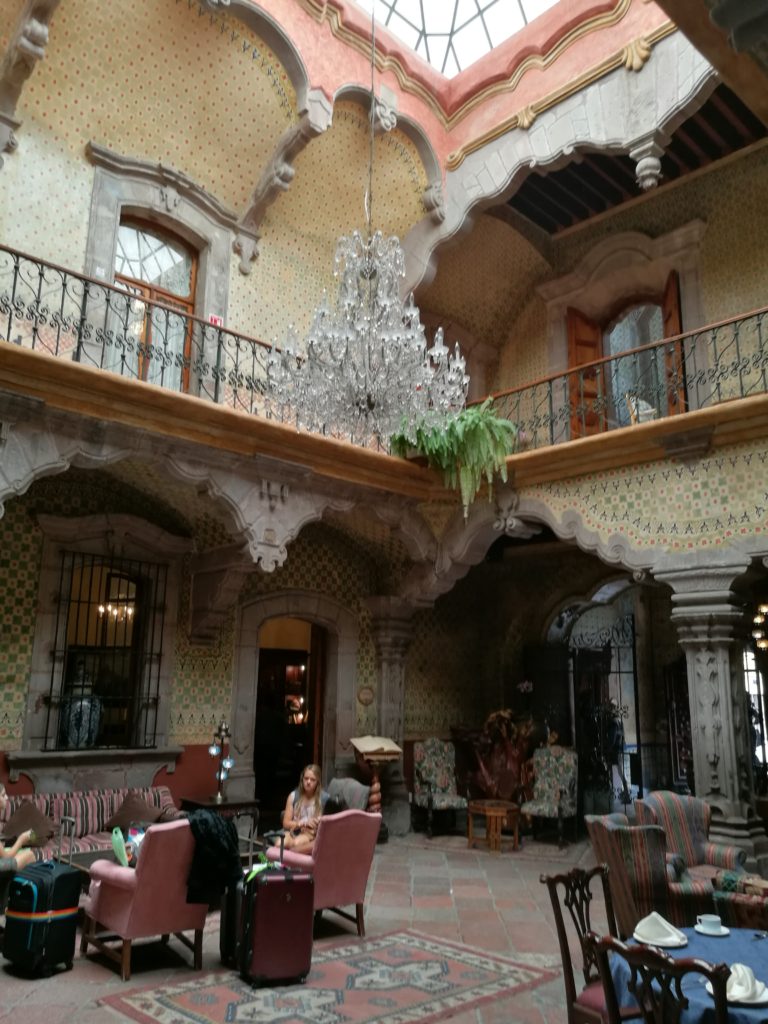 While dining, we called Uriel and arranged for him to meet us at our house at noon time for the promised city tour.

Uriel showed up exactly on time at our street, in a nice shiny near-new Mazda sedan for our tour. And what a tour it was!  Uriel, born and raised in Queretaro, possessed an incredible knowledge of the history of the city (we learned this was actually the first capitol of Mexico, among other interesting tidbits).  He drove us to the iconic aqueduct that was constructed in mid-1800 to provide water to the city (no longer in use, but beautiful and proud) 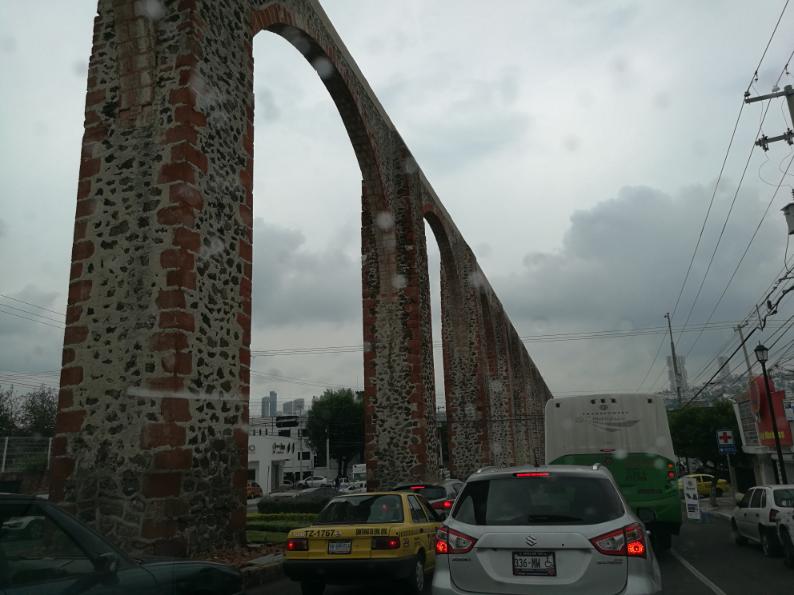 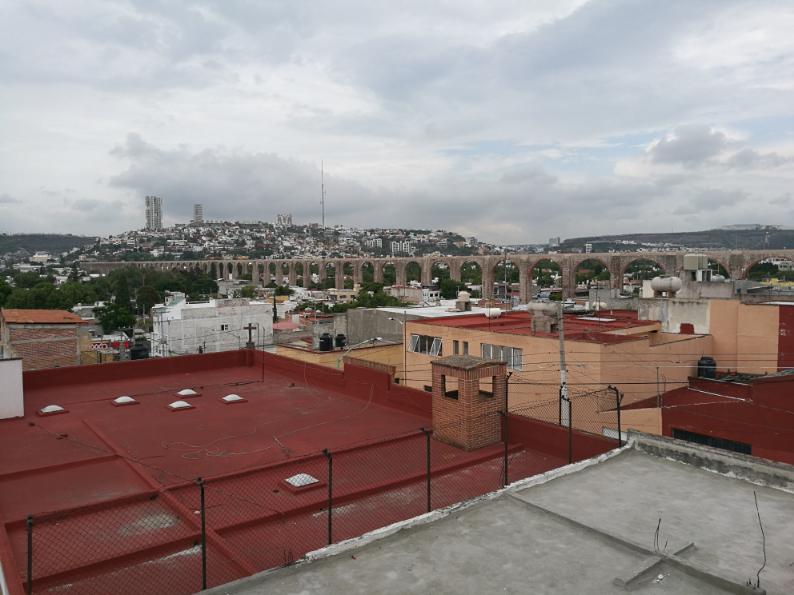 We also drove to and walked up the Hill of the Bells (Cerro de las Campanas), where the short-lived emperor Maximillian faced the firing squad, along with 2 other co-conspirators.  In spite of the gruesome circumstances, it is a lovely spot, overlooking the city in all directions. 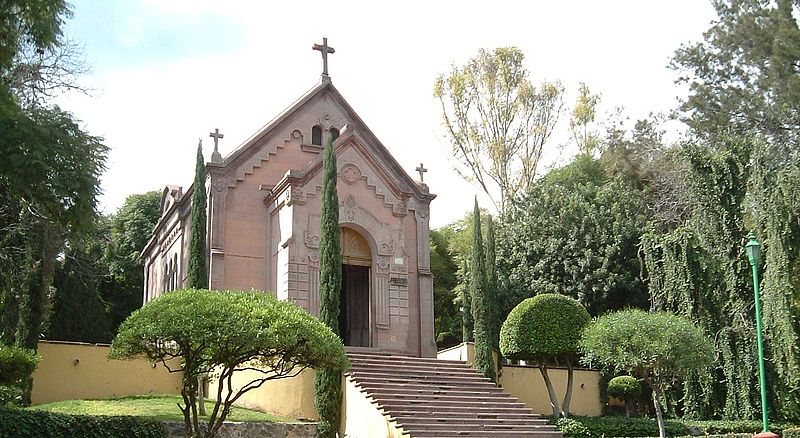 We also learned that Uriel is a musician, performing regularly in a small band (more about that later).  We had a great time, and invited him to join us for lunch.  Eventually, our so-called 2 hour tour stretched into a 4 hour one, all for the princely sum of about $25 (plus generous propina (tip) of course).

Later than same day, we learned of a 5 day Jazz festival (Again ALL FREE!) being held at another of the plazas within easy walking distance of us.  We scurried on down, and were fortunate to be able to score a table at a little outdoor pizza cafe which overlooked the stage of the festival: 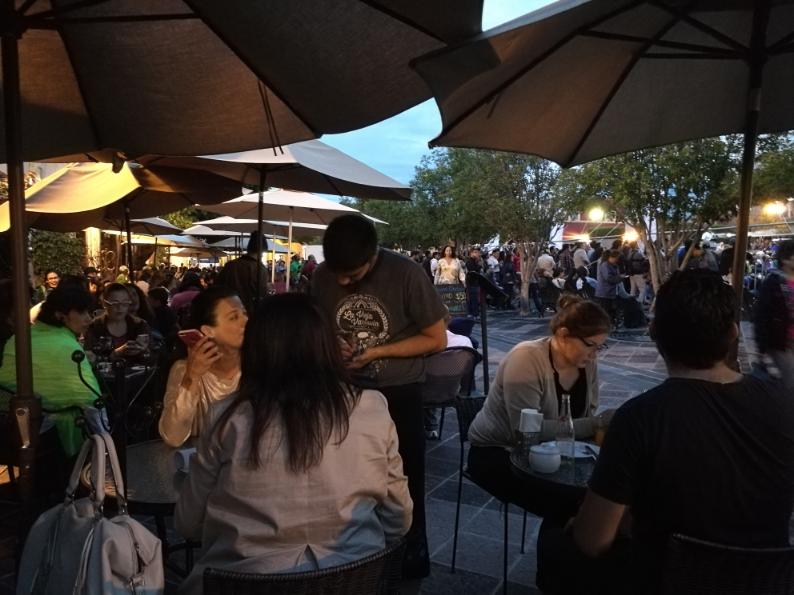 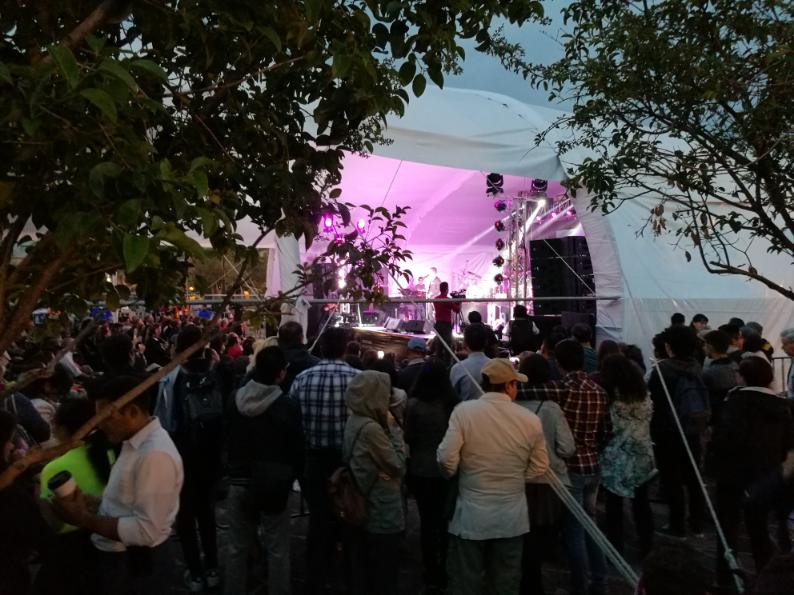 Wow! here just 3 evenings and already feels like a month’s worth of activities!

Today was museum day for us.  Dorothee noted that the Museo de Arte, again conveniently located in el Centro, had free admission today, so we had another leisurely breakfast then spent some time at the museum.  The building itself was once part of a Catholic Church, so needless to say, the architecture was exquisite.. kinda makes the Blanton look like a johnny-come-lately upstart! 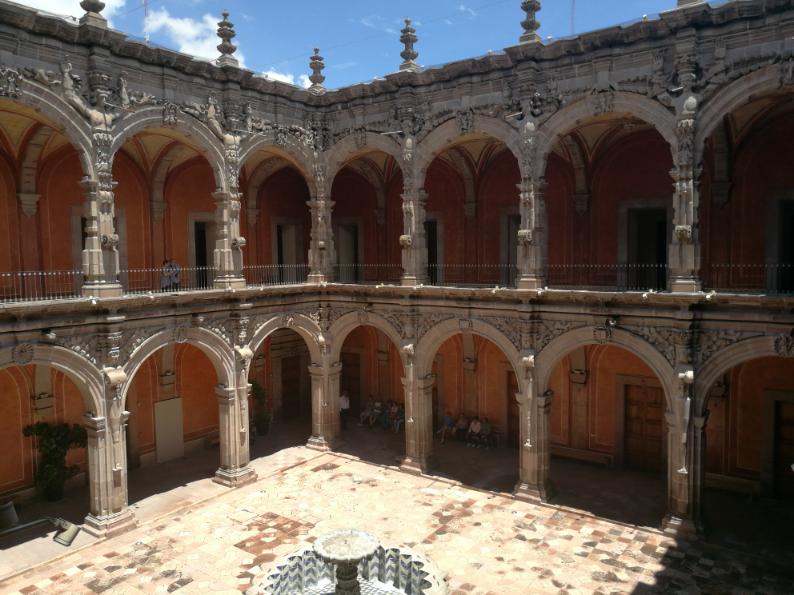 Yes, this IS Catholic territory, and incredibly ornate cathedrals exist on almost every corner.  It seems overkill to try to photograph them all! 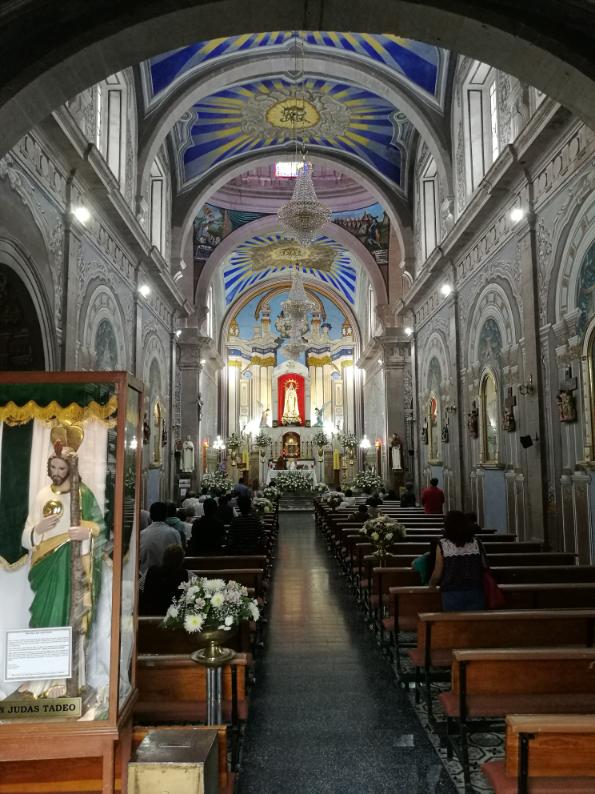 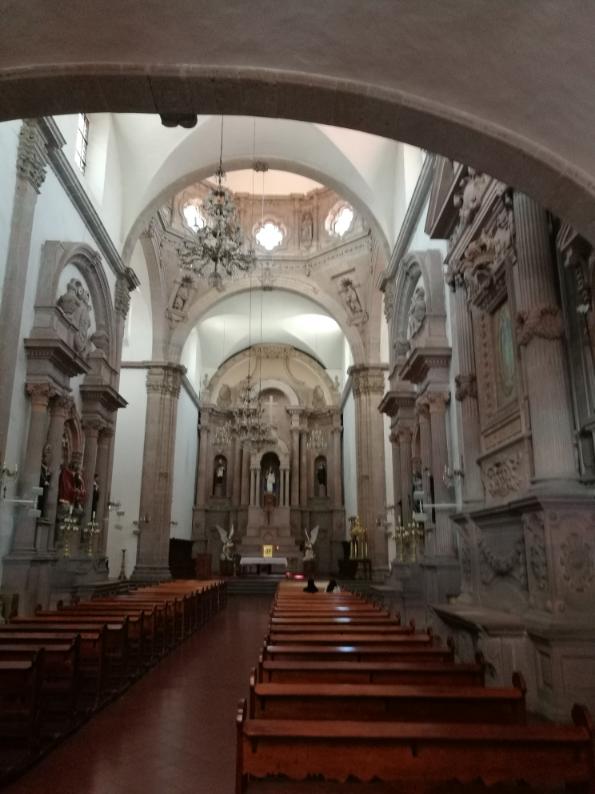 Shortly after the museum we stumbled onto the “Jardin de Arte”, a small walled plaza.  it just so happened that apparently one of the big bands of the area was having a rehearsal in the plaza, so we sat for awhile and had our own personal concert, shared by just a few other passersby:

Later in the day we made the even longer trek to El Mercado de la Cruz… a huge, huge covered market of individual vendors offering every imaginable food and articles: 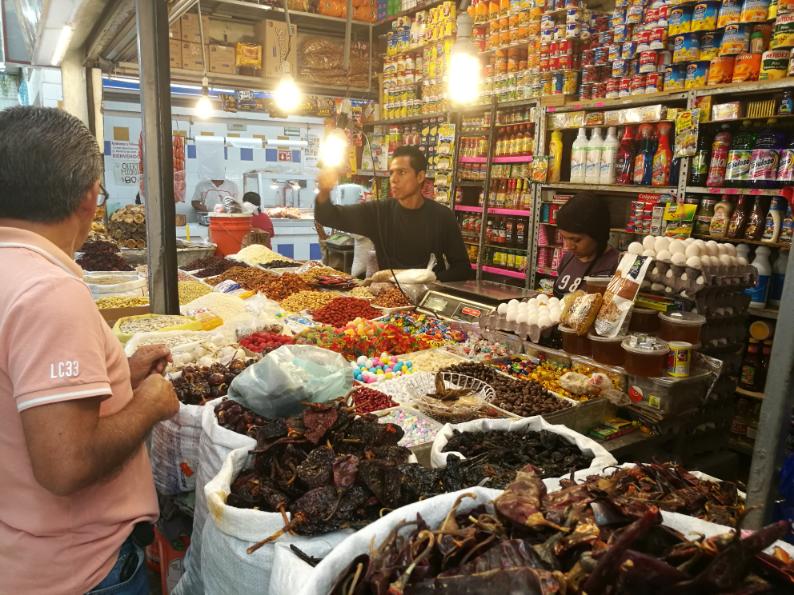 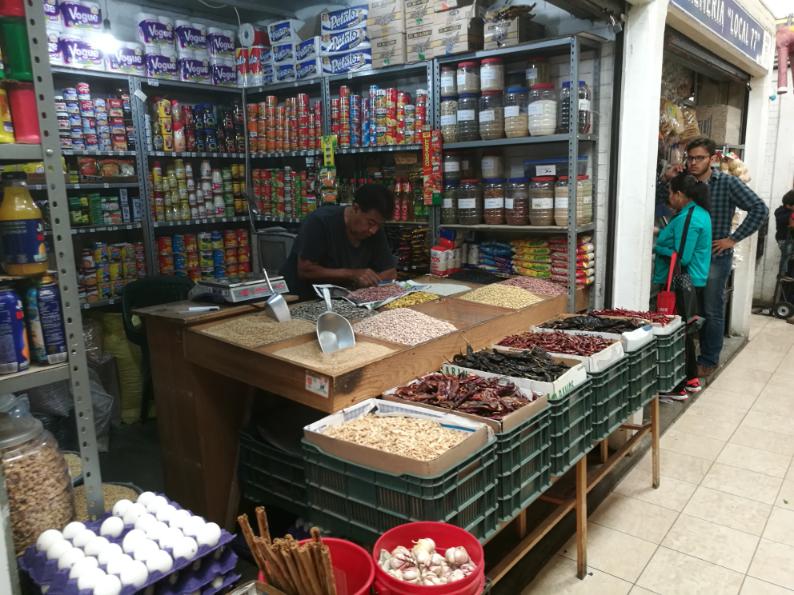 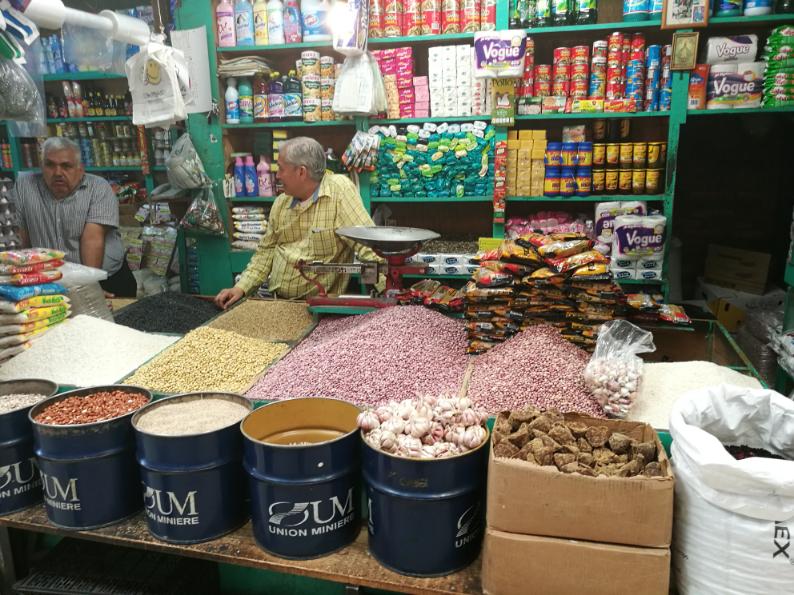 During our car tour on Tuesday, our tour guide mentioned that he plays in a band, and that the band was performing on Wednesday (tonight!).. Ironically at the very restaurant we had made plans to visit.  This is a Cajun-style restaurant, located right on the square of the Plaza Constitucion.  So naturally, we hoofed it on up to the square in time to secure a front row table, and have a wonderful meal 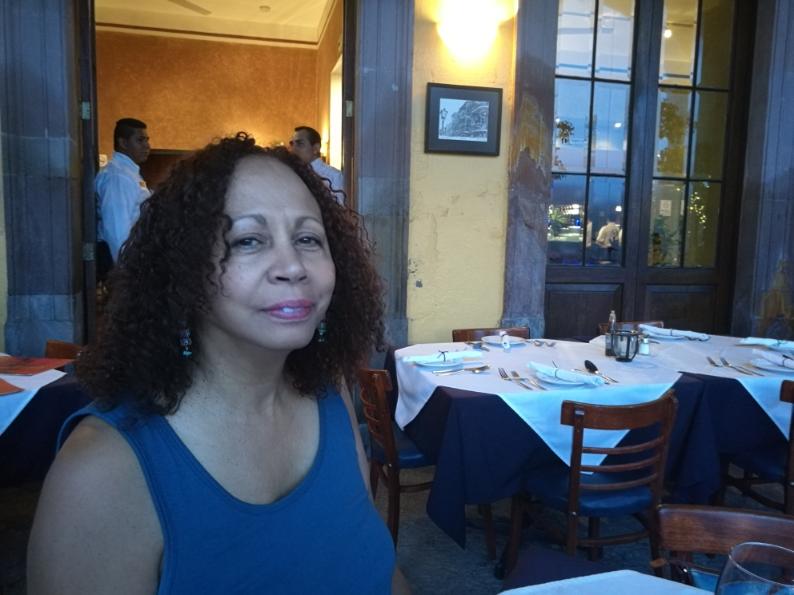 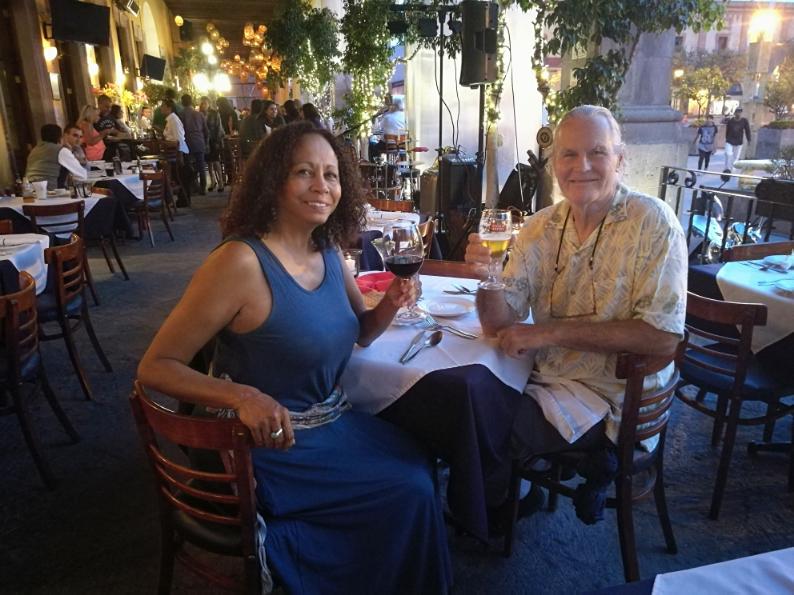 In short order, the band began its first set (no waiting until 1 AM in the morning like Austin!) and I must say I was truly and pleasantly surprised at the quality of these guys, including “our” Uriel, the percussionist: